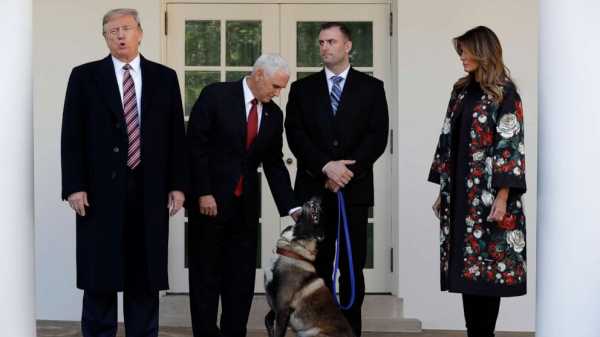 At the White House on Monday, President Donald Trump welcomed Conan — the hero dog from the raid that led to the death of Islamic State leader Abu Bakr al-Baghdadi.

Add Donald Trump as an interest to stay up to date on the latest Donald Trump news, video, and analysis from ABC News.

After emerging from the Oval Office with the dog and a handler, Vice President Mike Pence, and first lady Melania Trump, Trump spoke to reporters in the White House Rose Garden

“The dog is incredible, actually incredible,” Trump said of Conan, a Belgian Malinois. “We spent some good time with it. And, so brilliant. So smart.” 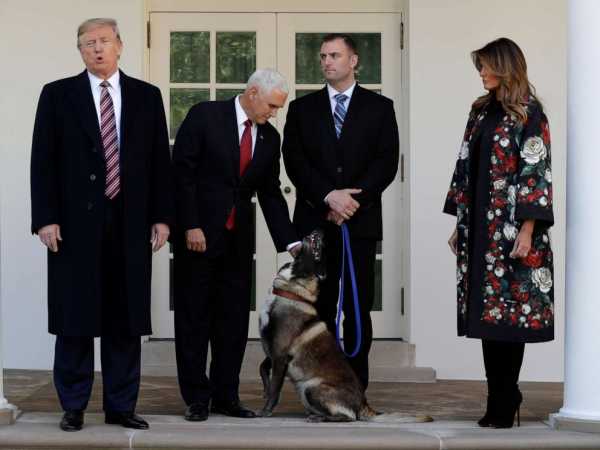 The president said he also had met earlier with some of the U.S. special operations troops involved in the raid, but said they could not come out in front of the press.

In October, nearly 100 U.S. troops and Conan were transported to northwestern Syria to raid the compound of al-Baghdadi. While no U.S. troops were killed in the operation, Conan was “slightly wounded,” according to Joint Chiefs Chairman Gen. Mark Milley.

During the press event on Monday with Conan, Trump said the dog was “very badly hurt” and there was a possibility he would not recover. However, “Conan is a tough cookie,” said Trump. “And nobody is going to mess with Conan.” 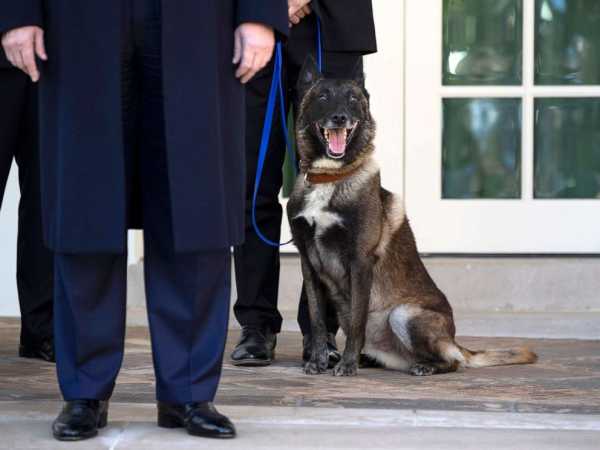 President Donald Trump stands with Conan, the U.S. Army dog that participated in the raid that killed ISIS leader Abu Bakr al-Baghdadi, in the Rose Garden of the White House, Nov. 25, 2019.

The dog has since recovered, and according to Trump is at prime age-wise and has not retired.

For his contribution in the raid, Conan received a medal and a plaque, Trump said. Additionally, a certificate and award will be placed in the White House.

Trump repeatedly pointed out how dangerous Conan could be during an attack — a very strong man without a gun wouldn’t have a chance, Trump said.

“And you’re very lucky he doesn’t — he’s not in a bad mood today,” Trump said, pointing towards the press.

The president previously Tweeted out a fake photo of him awarding Conan.

Despite praising Conan repeatedly, Trump never touched the dog in front of the press.

“We were going to put a muzzle on the dog — and I thought that was a good idea. But then he gets even more violent,” he said.

“Conan is really a hero,” Pence said, scratching behind Conan’s ears. “It’s really, it’s a real joy to be able to help walk him here to the White House.”

As the event ended, a member of the press corps asked the first lady if she would adopt the dog for Barron, the couple’s 13-year-old son. The president and first lady smiled and laughed, but Melania Trump said “no.”