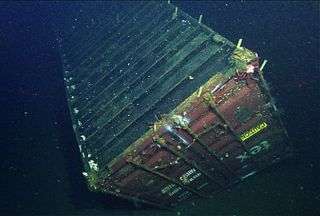 A shipping container after seven years on the seafloor.

Soon after it left the Port of Oakland, California, in February 2004, the shipping vessel  hit a strong winter storm with violent 30-foot-high (9 meters) swells. Amid rolling waves, 15 shipping containers came loose and toppled overboard, sinking to the icy seafloor inside the Monterey Bay National Marine Sanctuary.

Just four months later, scientists surveying the seafloor with an underwater robot found one of those lost containers nearly 4,200 feet (1,300 m) below the surface. They turned their chance discovery into an opportunity to study how aquatic life reacts to deep-sea pollution.

Ninety percent of the world’s goods are transported by ship, and inevitably hundreds, maybe thousands, of containers fall overboard each year. Lost containers have caused some strange objects from Legos to hockey gloves to wash ashore on beaches around the globe. The container was transporting 1,159 steel-belted car tires. But not all containers hold such innocuous goods. Some carry batteries, pesticides and industrial chemicals that could be toxic to marine life. The boxes themselves might even be made of hazardous materials. [Photos: Trash Litters Deep Seafloor]

Scientists found that the makeup of aquatic life looked different around the sunken shipping container than it did in the surrounding seafloor.

Researchers from the Monterey Bay Aquarium Research Institute (MBARI) deployed a remotely operated vehicle, or ROV, to collect video footage and seafloor samples from the sunken container site in March 2011.

The container, which had barely corroded, seemed to have a mixed effect on the local marine environment. For some animals, the box acted like an artificial reef. Creatures like tubeworms, top snails and scallops readily fixed themselves to the container, but the diversity of animals was actually lower around the hard surface of the box than the muddy seafloor, the scientists found. Jutting out of an otherwise flat seafloor, the container seemed to alter local bottom currents and attract predators, which could affect the distribution of animals.

“We have only begun to characterize the potential long term impacts of a single container on a deep-sea community,” MBARI researcher Josi Taylor said in a statement. “Although the effects of one container may seem small, the thousands of shipping containers lost on the seafloor each year could eventually become a significant source of pollution for deep-sea ecosystems.”

The researchers say further monitoring should help them assess how these localized changes play out in the long-term and whether the container’s toxicity will prevent future communities of animals from colonizing the site. The team is awaiting the results of samples from a follow-up ROV dive in December 2013 to study possible effects of the container’s coating, MBARI officials said.

The findings were published this month in the Marine Pollution Bulletin.