Home Planet Earth Would You Eat Human Meat Grown in a Lab? 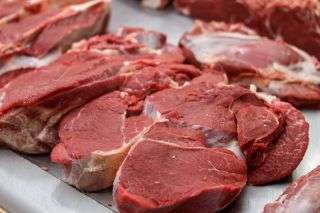 If you were told this beef was lab-grown human meat, would it look more or less appealing?

Richard Dawkins wants to know if lab-grown meat will eradicate the taboo against cannibalism.

In a tweet on March 3, the outspoken evolutionary biologist linked to an article about the possible commercialization of meat grown in a laboratory by the end of 2018. Dawkins was practically drooling, but it wasn’t over the food: “I’ve long been looking forward to this,” he wrote. “What if human meat is grown? Could we overcome our taboo against cannibalism?”

Lab-grown meat, he continued, would be an “interesting test case” pitting consequentialist morality against “yuck reaction” absolutism. In other words, lab-grown human meat might be ethical in the sense that no one experiences any bad consequences — no killing, no desecrating corpses — but humans might still instinctually recoil at the idea of eating it. [9 Disgusting Things That the FDA Allows in Your Food]

Dawkins’ question isn’t a new one, though research suggests that getting people to eat lab-grown meat at all might be a challenge — and that the market for lab-grown human meat would probably be vanishingly small.

“You’ll hear trend pieces, ‘Kids today are eating their friends!'” predicted Owen Schaefer, a professor at the Centre for Biomedical Ethics at the National University of Singapore. But in reality, he said, synthetic-human-meat eating “is going to be extremely rare.”

Meat in a petri dish

Lab meat, also known as “in vitro” meat or clean meat, is grown from just a few stem cells taken from a living animal. The first lab-grown meat was consumed in 2013 at a news conference in London. It was a burger made by Mark Post, a pharmacologist at Maastricht University in the Netherlands, and the two tasters reported that it was a bit dry.

In general, people are kind of grossed out about any sort of meat grown in the lab, researchers have found. A survey of potential lab-meat customers in the United States, published last year in the journal PLOS ONE, found that two-thirds of people would be willing to try the stuff, but only one-third could see themselves eating it regularly.

“On average, people see clean meat as more ethical and environmental than farmed meat, but less natural, tasty and appealing,” said study co-author Matti Wilks, a doctoral student in psychology at the University of Queensland, Australia.

Only 16 percent of respondents to Wilks’ survey said they’d eat lab-grown meat if it were more expensive than typical meat, suggesting that people generally don’t put too much monetary value on the ethical and environmental benefits of the product.

That study found a very small number of people who reported that they’d be more willing to eat meat from animals like dogs, horses and cats if that meat were grown in the lab. But the numbers were so small they wouldn’t be noticeable if scaled up to the whole population of consumers, Wilks told Live Science. What’s more, she noted, the study found that vegetarians who already didn’t eat meat were among the least likely to say they’d start eating meat if it were lab-grown. Similarly, people who don’t see the appeal of cannibalism aren’t likely to change their minds just because the meat was never part of a living person, she said.

Still, there are almost certainly going to be a few people who want to try synthetic human meat, Schaefer said, including performance artists who might want to serve a derivative of themselves to make a statement, or celebrities who might want to cash in by selling their fans the opportunity to taste their flesh. [Eating Brains: Cannibal Tribe Evolved Resistance to Fatal Disease]

“You’re going to get some people out there that will do it,” he said. “The question is, ‘Should we object to that? Should we ban people from synthesizing human flesh into something consumable?'”

In a 2014 paper in the Journal of Applied Philosophy, Schaefer and his co-author, Julian Savulescu, tried to work through the ethics of eating lab-grown human meat. They couldn’t find any convincing philosophical arguments to call it unethical, Schaefer said. In his tweet, Dawkins mentioned consequentialism, which is the idea that the ends justify the means. In that sense, no one is directly harmed by lab-grown cannibalism, because no one has to die and no one’s corpse gets desecrated.

Nor was there a good deontological argument against the practice, Schaefer said. In philosophy, deontology is the idea that the means do matter — for example, if you can save five people by killing one, killing that one person still may not be the ethical thing to do. Deontological arguments are usually based in notions of disrespect for persons, but again, there doesn’t seem to be anyone disrespected by eating synthetic human meat, Schaefer said.

One possible argument against cannibalism via clean meat could stem from virtue ethics, he said, the idea that humans should cultivate attitudes that are virtuous for their own sake.

“There you could say this is a disposition toward humanity to shift from seeing people as people, and maybe this would push us more to seeing people as meat,” he said. But that shift doesn’t seem particularly likely, he said.

While cannibalism is fun to talk about, Schaefer said, the real question is how clean meat will change humanity’s relationship with food from something that requires animal suffering to something made in a lab. If clean meat can be as tasty and safe as regular meat and be sold at cheaper prices, it will probably become widespread, he said. (Post’s 2013 burger cost a whopping $300,000, but the technology is improving.) Wilks agreed that people will likely become more open to clean meat once it hits the grocery store shelves.

“Right now, I believe it is seen somewhat as a future technology, but once it’s tangible I think that will change,” she said, “and I am optimistic that people will engage with it.”

Coronavirus theories: Is coronavirus an experiment gone wrong – Is it...