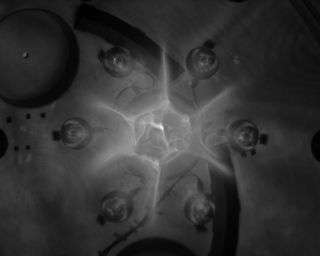 Seven supersonic jets of plasma collide during an early test firing of the Plasma Liner Experiment.

Generating endless energy with zero emissions by just slamming hydrogen atoms together has been somewhat of a pipe dream for decades. Now, scientists may be getting a tiny step closer to feasible fusion power, thanks to a futuristic experiment and dozens of plasma guns.

Eighteen of 36 plasma guns are in place on the machine that could make  fusion power a reality. Those guns are the key components of Los Alamos National Laboratory’s Plasma Liner Experiment (PLX), which uses a new approach to the problem. PLX, if it works, will combine two existing methods of slamming single-proton hydrogen atoms together to form two-proton helium atoms. That process generates enormous amounts of energy per speck of fuel, much more than splitting heavy atoms (fission) does. The hope is that the method pioneered in PLX will teach scientists how to create that energy efficiently enough to be worthwhile for real-world use.

The promise of fusion is that it produces tons of energy. Every time two hydrogen atoms merge into helium, a small portion of their matter converts into a whole lot of energy.

The problem of fusion is that no one’s figured out how to generate that energy in a useful way.

The principles are simple enough, but the execution is the challenge. Right now, there are plenty of hydrogen-fusion bombs in the world that can release all their energy in a flash and destroy themselves (and everything else around for miles). The occasional kid even manages to build a tiny, inefficient fusion reactor in their playroom. But existing fusion reactors suck up more energy than they create. No one’s yet managed to create a controlled, sustained fusion reaction that spits out more energy than gets consumed by the machine creating and containing the reaction.

The first of the two methods PLX combines is called magnetic confinement. This is what’s used in fusion reactors called tokamaks, which use powerful magnets to suspend the superheated, ultradense plasma of fusing atoms inside the machine so it keeps fusing and doesn’t escape. The biggest of these is ITER, a 25,000-ton (23,000 metric tons) machine in France. But that project has faced delays and cost overruns, and even optimistic projections suggest it won’t be complete until the 2050s, as the BBC reported in 2017.

The second approach is called inertial confinement. Lawrence Livermore National Laboratory, another Department of Energy facility, has a machine called the National Ignition Facility (NIF) that is taking this route to fusion. The NIF is basically a very big system for firing super powerful lasers at tiny fuel cells containing hydrogen. When the lasers hit the fuel, the hydrogen heats up and, trapped within the fuel cell, fuses. The NIF is operational, but it doesn’t generate more energy than it uses.

PLX, according to a statement from the American Physical Society (APS), is a little different than either of those two. It uses magnets to contain its hydrogen, like a tokamak. But that hydrogen is brought to fusion temperatures and pressures by hot jets of plasma shooting out of the guns arrayed around the device’s spherical chamber, employing the guns instead of lasers like those used at NIF.

The physicists leading the PLX project have done some early experiments using the 18 guns already installed, according to APS. Those experiments have offered researchers early data on how the plasma jets behave when they collide inside the machine, and researchers presented that data yesterday (Oct. 21) at the Annual Meeting of the APS Division of Plasma Physics in Fort Lauderdale, Florida. That data is important, the researchers said, because there are contradictory theoretical models of exactly how plasma behaves when it collides in these sorts of collisions.

Los Alamos said that the team hopes to install the remaining 18 guns in early 2020 and conduct experiments using the full 36-plasma-gun battery by the end of that year.

Rafi joined Live Science in 2017. He has a bachelor’s degree in journalism from Northwestern University’s Medill School of journalism. You can find his past science reporting at Inverse, Business Insider and Popular Science, and his past photojournalism on the Flash90 wire service and in the pages of The Courier Post of southern New Jersey.

Nostradamus ‘There will be a twin year’ prediction: Did Nostradamus predict...