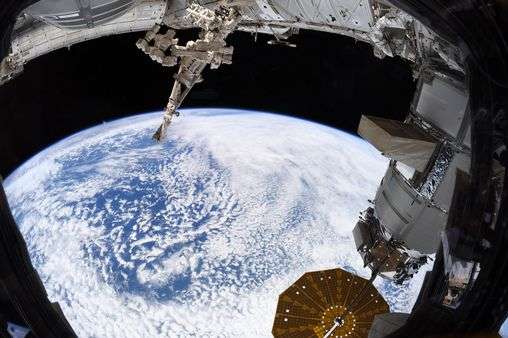 NASA astronaut, Jessica Meir, has shared several photos of Earth from the International Space Station on Twitter this week

Now, one NASA astronaut on board the ISS has snapped several stunning photos of our planet, showing the ‘ever-changing skyline’ on the space station.

Jessica Meir tweeted the photos, writing: “The first orientation may make more sense to you, but to me this is the ever-changing skyline on @Space_Station (photo 3). Perspective.

“The constant traffic of visiting vehicles makes for diverse vistas.”

While the Earth is clearly round in the photos, several sceptical viewers aren’t convinced, with many still claiming that our planet is flat.

One user replied: “Nice try with the fish eye, but it’s flat,” while another added: “That’s fish eye lens. Make Earth looks like round. Actually, the earth is flat!”

And one questioned: “So from 400km above the earth you can view the whole round earth? Yeah very believable.”

While these conspiracy theorists are convinced that the Earth is flat, humans have actually known that Earth is round for more than 2,000 years.

“They could even see the planet's round shadow on the moon during a lunar eclipse. (We still can see this during lunar eclipses.)”

Today, scientists can use GPS and other satellites to measure Earth’s size and shape to within a centimetre!

NASA added: “Even though our planet is a sphere, it is not a perfect sphere. Because of the force caused when Earth rotates, the North and South Poles are slightly flat.

“Earth's rotation, wobbly motion and other forces are making the planet change shape very slowly, but it is still round.”

Deadly coronavirus outbreak in Wuhan may have come from bats, research...