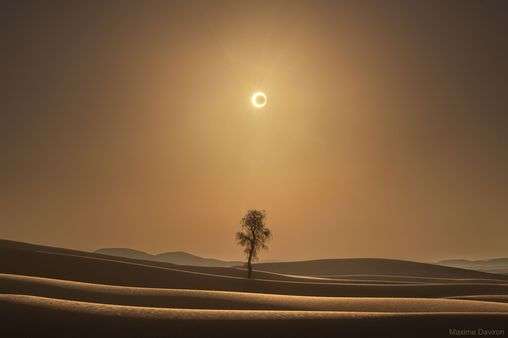 The beautiful photo was snapped by photographer Maxime Daviron, and has been featured as NASA’s Astronomy Picture of the Day

At first glance at this photo, you’d be forgiven for mistaking it as a stunning work of art.

But the photo is very much real, and was snapped last month from the Rub al-Khali desert.

The beautiful photo was snapped by photographer Maxime Daviron, and has been featured as NASA ’s Astronomy Picture of the Day.

It shows a ‘ring-of-fire’ eclipse , also known as an ‘annular eclipse’.

NASA explained: “A ring-of-fire eclipse is an annular eclipse that occurs when the Moon is far enough away on its elliptical orbit around the Earth so that it appears too small, angularly, to cover the entire Sun. 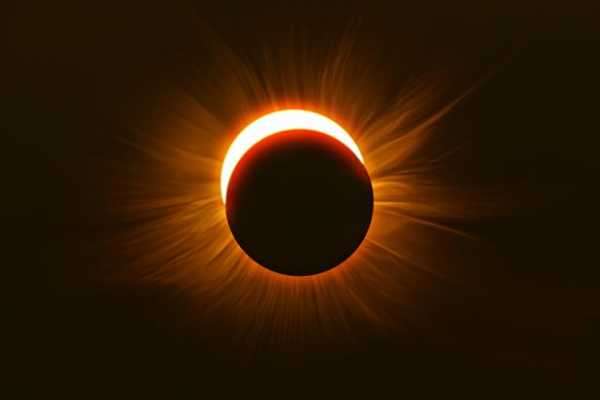 This particular eclipse peaked shortly after sunrise, and Ms Daviron managed to position herself perfectly to photograph it.

NASA added: “After seeking out such a dry and barren place, it turned out that some of the most interesting eclipse images actually included a tree in the foreground, because, in addition to the sand dunes, the tree gave the surreal background a contrasting sense of normalcy, scale, and texture.”

This particular eclipse will begin in central Africa and travel through Saudi Arabia, northern India and southern China before ending in the Pacific Ocean.

However, a partial eclipse should be visible throughout most of eastern Africa, the middle East and southern Asia.