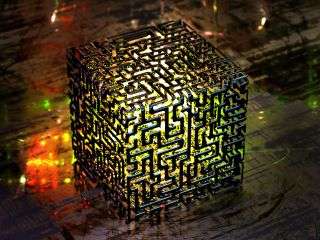 A team of scientists in China has linked quantum memories over more than 30 miles (50 kilometers) of fiber optic cable, beating the previous record by more than 40 times over. This feat is an important step toward a hack-proof internet, scientists said.

The internet we use today was truly a revolutionary invention. It connected the world with information and allowed us to share millions of photos of cute and cuddly cats. But the internet is also filled with hackers trying to intercept important or sensitive information. To fight back, physicists have come up with a solution, with a little help from Schrödinger’s cat, the famous, hypothetical dead-and-alive feline meant to expose the weird nature of subatomic particles.

That proposed solution is a new internet ruled by the bizarre world of quantum mechanics. Such an internet could someday become the standard for securely sending, receiving and storing data.

In the classical computing world, information is represented by bits with values of either 0 or 1. A quantum internet, like a quantum computer, would take advantage of one of the fundamental properties of quantum mechanics, the superposition principle. This principle is famously described using physicist Erwin Schrödinger’s paradox of a cat in a box being both dead and alive at the same time. Quantum computers use quantum bits, or “qubits,” which can exist in a superposition state in which they have a value of both 1 and 0 simultaneously. A qubit exists in this state of uncertainty until it is measured by an observer, collapsing the qubit into a definite state of 0 or 1.

If you pair two or more qubits together, they become entangled. Quantum entanglement is the ethereal connection between two or more particles such that any action performed on one instantaneously affects the others, regardless of how far apart they are. Albert Einstein famously called this phenomenon “spooky action at a distance.” The real magic of a quantum internet would begin when information gets sent using entangled particles, also called quantum teleportation.

“Quantum teleportation is a way to transfer an unknown quantum state from one particle to another at a distant location, without sending the original particle itself,” Jian-Wei Pan, a professor of physics at the University of Science and Technology of China in Hefei and co-author of the study,said in an interview with the National Science Review.

Because entangled qubits are not physically linked together in any shape or form, interception of communications between them is impossible.

Pan and his team have already demonstrated the entanglement of light particles, or photons, over long distances through empty space. In 2017, his team entangled two photons separated by 746 miles (1,200 km) using an Earth-orbiting satellite relay named Micius.

In practice, entanglement is a finicky business. The tiniest of disturbances, such as a change of temperature or vibration, can break the link between entangled particles, collapsing their shared state. To realize a true quantum internet, physicists will need to enlist the help of so-called quantum memories.

“Quantum memory is a device that stores quantum information. [It] needs to store the superposition of two states,” Xiao-Hui Bao, a professor of physics at the University of Science and Technology of China in Hefei and co-author of the study, told Live Science.

In the study, published Feb. 12 in the journal Nature, Pan and his colleagues succeeded in entangling quantum memories across 50 km of fiber optic cable. The previous record of separation between memories was 0.8 miles (1.3 km).

In the new study’s experiment, the quantum memory is an ensemble of laser-cooled rubidium atoms trapped in a vacuum, Bao said. The team used photons to read and write to the cloud of 100 million trapped atoms. Photons were used to both excite the atoms into a higher energy state, setting the qubits the researchers wished to entangle, and produce an entangled photon to be sent down the optical cable. The researchers then needed to change the frequency of the photon so that it would not get lost in the 50 km of fiber optic cable coiled in their lab. Finally, the photon could be sent on its journey through the cable to successfully entangle the second quantum memory.

Although quantum entanglement between the memories was achieved, the team has yet to perform quantum teleportation of information between the two nodes. The researchers said they hope this work will pave the way for creating a web of quantum relay stations that would extend entangled communication to longer distances, eventually leading toward a large-scale quantum network.

New coronavirus from China: Everything you need to know