Home Science and Technology ‘UFO’ videos declassified by US Navy 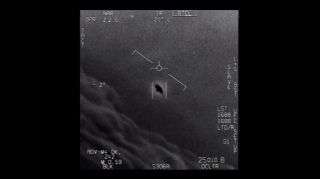 U.S. Navy videos of alleged UFO sightings were previously available but had not been officially declassified.

Three videos of midair military interactions with UFOs, previously released without official permission by a UFO research group, were declassified and shared online today (April 27) by the U.S. Navy.

The footage, captured by U.S. Navy pilots years ago, shows mysterious, wingless aircraft traveling at hypersonic speeds, with no visible means of propulsion. UFO research group To the Stars Academy of Arts and Science published the clips in 2017 and 2018; at the time, those videos were allegedly declassified, Live Science previously reported. However, in September 2019, Joseph Gradisher, a spokesperson for the Deputy Chief of Naval Operations for Information Warfare said that the footage had not been cleared for official release.

Today, the three clips — “FLIR,” “GOFAST” and “GIMBAL” — appeared for the first time on the Naval Air Systems Command website, available to download through the Freedom of Information Act.

In releasing the videos, the U.S. Navy officially acknowledges that its pilots encountered so-called unidentified aerial phenomena, according to the military news website Military.com.

The three sightings, which took place in November 2004 and in January 2015, were recorded by F/A-18 Hornet fighter pilots during military training exercises in restricted airspace. Unlike fighter jets, the airborne enigmas had “no distinct wing, no distinct tail, no distinct exhaust plume,” Navy pilot Lt. Danny Accoin said in the 2019 History Channel documentary series “Unidentified: Inside America’s UFO Investigation.”

Department of Defense officials decided to release the videos after determining that the footage “does not reveal any sensitive capabilities or systems, and does not impinge on any subsequent investigations of military air space incursions by unidentified aerial phenomena,” Pentagon spokesperson Sue Gough said in a statement.

To the Stars Academy, founded by former Blink-182 singer Tom DeLonge, shared the Flir and Gimbal clips in December 2017, and shared GoFast in March 2018. Though a video description claimed that all three clips had “been through the official declassification review process of the United States government and approved for public release,” the footage had not been properly declassified and should not have been shared publicly, Gradisher said in 2019.

There is as yet no explanation or identification — official or not — for the mysterious aircraft that the pilots recorded.