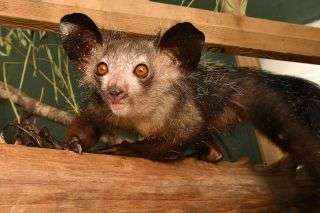 Aye-ayes possess small “pseudothumbs” — complete with their own fingerprints — that may help them grip objects and branches as they move through trees.

There’s a little extra thumb-thing on the hand of the aye-aye, a strange-looking nocturnal lemur native to Madagascar. Tucked near each wrist is a small nub of bone and cartilage that’s like a miniature thumb — and until recently, scientists didn’t know this pseudothumb existed.

Aye-ayes () are considered by many to be the weirdest of all primates, with their coarse and frazzled bedhead fur, oversize ears, bulging eyes and bony, spindly fingers, one of which is exceptionally long.

But the discovery of the hidden mini-thumb makes aye-ayes even weirder: They are the only primate to have evolved an extra finger to help with grasping. The formerly unknown digit even has its own fingerprint, scientists reported in a new study.

In local Malagasy folklore, aye-ayes are seen as symbols of death and evil, capable of delivering curses and bringing bad luck, according to the Duke Lemur Center in North Carolina.

However, the aye-ayes’ long, flexible fingers are best suited not for cursing humans, but for tapping on tree branches to locate hollow regions where tasty grubs hide, and then to poke inside holes and fish insects out, the Duke Lemur Center said.

“Their fingers have evolved to be extremely specialized — so specialized, in fact, that they aren’t much help when it comes to moving through trees,” said co-lead study author Adam Hartstone-Rose, an associate professor of biological sciences at North Carolina State University (NCSU).

Aye-aye hands are so strange that when the animals move they appear to be “walking on spiders,” Hartstone-Rose said in a statement. It could be this extreme adaptation that drove the evolution of an extra digit to help with grasping, which aye-ayes’ long, skinny fingers couldn’t manage very well, the researchers wrote in the study.

It was during a routine dissection of an aye-aye’s forearm when scientists found the extra digit; they were tracing a tendon that unexpectedly divided in two, said co-lead author Edwin Dickinson, a postdoctoral researcher with the NCSU Department of Biological Sciences.

“Rather than attaching to the ‘true thumb,’ like the muscle does in other primates, it actually split to send half of the tendon to the true thumb and half to an expanded bone in the wrist — a bone which we now know forms part of this novel sixth digit, the pseudothumb,” Dickinson told Live Science in an email.

Intrigued, they went looking for this new digit in other lemurs: six adults and one juvenile. Sure enough, they found the mini-thumb in all the individuals, extending from both wrists.

But it isn’t that surprising that this miniature thumb went unseen by scientists for so long, Dickinson said. Aye-ayes are rare, found only in Madagascar, and with very few in captivity; they’re nocturnal, making their habits difficult to observe; and because their hands are so unusual, most of the attention that they get is focused on the digits that researchers could see, Dickinson explained.

The pseudothumb likely helps the aye-ayes grasp branches and other things, the study authors reported.

“The species has so many features that are unique among primates — ever-growing incisors, their specialized fingers, and huge ears — and their pseudothumb is yet more evidence of this,” Dickinson said.

“I think this discovery also really underscores how specializing your anatomy for a specific task — in this case, feeding — can necessitate some really bizarre and unexpected adaptations to compensate,” he added.

The findings were published online today (Oct. 21) in the American Journal of Physical Anthropology.

Scientists have created a luminous patch for wound healing.

Why peripheral calculations should play a key role on predpriyatiyakh

What could drive humans to extinction?