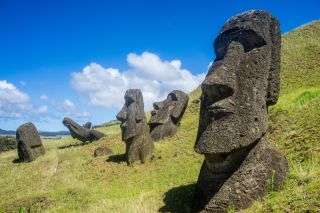 A resident of Rapa Nui (also known as Easter Island, a Polynesian territory of Chile) was arrested last week for damaging one of the island’s sacred moai statues with his pickup truck, Chilean news site Cooperativa reported.

Local police said the truck likely rolled down a hill and struck the statue’s ceremonial platform, or “ahu,” after being left unattended. The man left the truck with only a rock wedged under its front tire to compensate for a broken parking brake.

According to Camilo Rapu, president of Easter Island’s indigenous Rapa Nui community, the accident caused “incalculable” damage to the statue and its platform.

“The moai are sacred structures of religious value for the Rapa Nui people,” Rapu told CNN. “[The damage] is an offense to a culture that has lived many years struggling to recover its heritage and archaeology.”

The island’s famous monolithic heads are each between 1,000 and 500 years old, with the largest measuring up to 40 feet (12 meters) tall and weighing 75 tons (68 metric tons). (So far, no details about the damaged statue’s size have been released.) Each of the island’s roughly 1,000 moai statues, hundreds of which ring the island’s perimeter on stone platforms, are considered UNESCO World Heritage sites.

The island’s mayor, Pedro Edmunds Paoa, said the accident is a reason to impose  traffic laws on Rapa Nui. Outside of Rapa Nui’s main town, Hanga Roa, there are few paved roads and no traffic lights; with a growing population of roughly 8,000 residents and 12,000 tourists visiting every month, the island is overdue for stricter driving rules, Edmunds Paoa said.

“Everyone decided against establishing traffic rules when it came to vehicles on sacred sites — but we, as a council, were talking about the dangers and knew very well what the rise in tourist and resident numbers could mean,” Edmunds Paoa told Chile’s El Mercurio newspaper. “They didn’t listen to us, and this is the result.”

While traffic laws might be lax on Rapa Nui, the punishment for damaging one of the island’s artifacts can be severe. In 2008, a Finnish tourist who broke the ear off of a statue was fined $17,000 and was banned from the island for three years.

Capitalism is turning us into addicts