Home Strange news Stolen painting reappears after 23 years, in the same gallery where it... 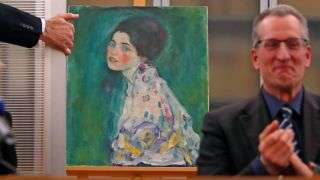 The missing Gustav Klimt painting ‘Portrait of a Lady’ is displayed after being stolen 23 years ago.

A famous painting by Austrian Gustav Klimt had been missing for 23 years. Now, it turns out, the painting was hidden  in the walls of the gallery from which it was stolen.

The 1917 Klimt, known as “Portrait of a Lady,” was found missing from the Ricci Oddi modern art gallery in Piacenza, Italy, on Feb. 22, 1997. It’s still unknown who took the artwork, but now it appears that the painting may have never left the gallery grounds. A gardener at the gallery said he was clearing ivy on Dec. 10, 2019, according to the Associated Press, when he found a bag in a gap in the walls. That bag contained the portrait, in remarkably undamaged condition.

“It’s with no small emotion that I can tell you the work is authentic,” Piacenza prosecutor Ornella Chicca said during a Jan. 14 press conference, according to the Associated Press.

The only major sign of wear, according to the AP, is a small mark on the side of the painting where it may have been hurriedly removed from its frame.

Klimt, an Austrian painter best known for his colorful, patterned portraits of women, produced works that now command enormous sums on the open market. According to the AP, Oprah Winfrey recently sold Klimt’s “Portrait of Adele Bloch-Bauer II” for $150 million.

It’s possible, according to Anne-Marie O’Connor, an expert in stolen Klimt art who was interviewed by the AP, that the thieves stashed “Portrait of a Lady” in the gallery wall – hoping to return to recover and sell it once news of the theft died down. But in the 1990s, the values of Klimt’s works were climbing sharply; the thieves may have concluded it would never be possible to sell the artwork to a private buyer.

O’Connor is the author of a book, “The Lady in Gold,” which documents the successful effort to recover five other stolen Klimt works. The paintings desribed in the book — the most notable of which was “Portrait of Adele Bloch-Bauer I” — were stolen by Nazis during the Holocaust from the Jewish Block-Bauer family. The works ended up in the possession of the Austrian government. Adele Bloch-Bauer’s niece Maria Altmann filed a lawsuit in 2000 demanding the paintings’ return. The suit ended up in front of the U.S. Supreme Court, and the paintings were returned to Altmann in 2006.

A Baby Volcano Was Just Discovered in the Pacific, and It’s...