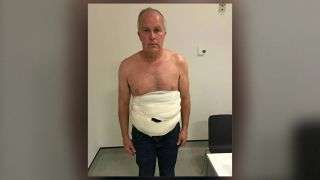 When Lendrum was apprehended in June 2018, he was carrying rare falcon eggs strapped to his body in a custom sling.

Two grinning men pose for a video camera in front of a helicopter: “We’re going on a tour,” one of them says and laughs. But what they were about to do was no joyride; it was both dangerous and illegal. They were attempting to steal the eggs of rare falcons from the birds’ nests, on a perilously steep cliff in Nunavik territory in northern Quebec.

Another clip shows one of the men, Jeffrey Lendrum, dangling from a harness, a pouch at the ready for holding stolen eggs. Recorded in 2000, the footage was found in Lendrum’s luggage when he was arrested in May 2010 in the United Kingdom on suspicion of smuggling 14 peregrine falcon eggs out of the country, the BBC reported that year.

Lendrum pled guilty to that crime in August 2010, but the conviction wasn’t his first — nor would it be his last. Over four decades, Lendrum steadily built a reputation as a master smuggler of endangered falcon eggs, stealing them from locations around the world and selling them to private collectors for tens of thousands of dollars apiece. His remarkable tale comes together piece by astonishing piece in the book “The Falcon Thief: A True Tale of Adventure, Treachery and the Hunt for the Perfect Bird” (Simon & Schuster) by Joshua Hammer, published today (Feb. 11).

Falcons are swift and graceful birds of prey, and people have trained and bred these raptors as hunters for thousands of years across the Middle East, where falcons are still highly valued, Hammer told Live Science.

Breeding captive falcons for collectors is a tightly regulated and extremely profitable business. Healthy adult peregrines () may fetch as much as $25,000 from eager collectors in Qatar, while the Arctic gyrfalcon (), the largest of all falcons, can command a price of up to $250,000, Forbes reported in 2015.

“Some Arab sheiks are willing to pay $400,000 for a single white gyrfalcon, which is considered the most beautiful and rarest of birds,” Hammer said.

In fact, demand across the Persian Gulf for wild falcons is so high that opportunities abound for people like Lendrum, who steal and sell the protected birds and their eggs. Research into Lendrum’s underworld network revealed just a glimpse of an extensive black market for illegal falcons, Hammer added.

“Lendrum’s not the only one who would go off to remote corners of Russia or Pakistan or any place you find wild raptors, and catch these birds and then smuggle them,” he said.

When writing “The Falcon Thief,” Hammer tracked down the camera operator who shot the Quebec helicopter footage, an associate of Lendrum’s named Paul Mullin. That story became one of the centerpieces of Hammer’s book, and the “outlandish, expensive operation, apparently financed by the sheiks,” marked the pinnacle of Lendrum’s criminal career, according to Hammer.

“It was kind of all downhill from there,” he said.

“The Falcon Thief,” by Joshua Hammer

“Joshua Hammer has that rare eye for a thrilling story, and with  he has found the perfect one— a tale brimming with eccentric characters, obsession, deception, and beauty. It has the grip of a novel, with the benefit of being all true.” — David Grann, NY Times bestselling author View Deal

Though Lendrum is but a single player in the illegal falcon trade, he’s arguably the best-known of these egg thieves, due to the spectacle of his airport arrests over the past 10 years. His capture in May 2010 at Birmingham Airport airport in the U.K. made headlines, and was accompanied by a photo of Lendrum wearing 14 swaddled peregrine eggs taped to his body in a custom sling to keep them warm, according to the Royal Society for the Protection of Birds (RSPB).

But Lendrum insisted that they were duck eggs, and that he was wearing them on his doctor’s recommendation to help with back pain, Hammer wrote in the book. That excuse didn’t fly with the judge, who sentenced Lendrum to 30 months in jail, the RSPB reported.

Lendrum was arrested again in October 2015 at Sao Paulo International Airport in Brazil, as he was trying to board a plane with an incubator holding four eggs he had stolen in Chile; those eggs were thought to belong to the rare peregrine subspecies , or Cassini falcon, the UK National Wildlife Crime Unit (NWCU) reported. Chicks from these eggs would have commanded up to $80,000 each on the black market, according to the NWCU.

In January 2016, a Brazilian judge sentenced Lendrum to 4.5 years in jail, but Lendrum had already skipped bail and left the country (he is currently facing extradition to Brazil, The Guardian reported).

However, Brazilian officials will have to wait for Lendrum to first finish serving yet another sentence in the U.K. He was arrested in June 2018 arriving at Heathrow Airport from Johannesburg, South Africa, and he was carrying a substantial payload of purloined avian wildlife, a U.K. Border Control representative said in a statement.

“During a full search, he was found to be wearing a body belt concealing 19 bird eggs as well as 2 newly-hatched chicks,” according to the statement.

At the trial, Lendrum told the court that “his intention was to rescue the eggs after he encountered some men chopping down trees containing their nests.” But wildlife experts overturned his story when they identified the eggs as originating from nests on cliffs, and on Jan. 10, Lendrum was sentenced to 3 years and 1 month in prison.

For some people, serving a string of jail terms in multiple countries might be a deterrent to future crimes, perhaps encouraging them to rethink their thieving ways. However, that was clearly not the case with Lendrum, who to this day downplays the seriousness of his acts and continues to spin fabulous fabrications about his intentions for the eggs that he has stolen, Hammer said.

“He can’t stop lying,” Hammer said. “I saw the interrogation tapes when he was on trial in Brazil; he’ll tell these incredibly outlandish lies one after another, which the judge basically laughed at before sentencing him to five years in prison.”

Lendrum’s convoluted and fantastic explanations for his so-called conservation activities, along with his utter lack of remorse, likely also contributed to the length of his latest prison sentence in the U.K., Hammer added.

“He was very opaque — sort of a self-deluding liar — and he remained in total denial about everything that he had done, even though the evidence was just so overwhelming,” Hammer said.

As Lendrum himself said in an interview with Hammer: “I honestly didn’t think that there would be a problem if I were caught.”

Why are children ‘missing’ from coronavirus outbreak cases?