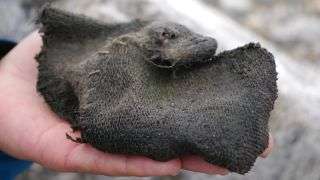 Mitten found at Lendbreen, made from different pieces of woven fabric. Radiocarbon-dated to the ninth century.

Archaeologists recently documented a rare treasure trove of Viking Age objects littering a long-forgotten mountain pass, including the remains of a dog wearing its collar and leash.

As climate change melts Norway’s glaciers, pockets of history hidden for centuries or millennia are finally seeing the light of day. Melting along a high-altitude trail in the Lendbreen glacier has revealed hundreds of artifacts dating to the Viking Age, the Roman Iron Age and even the Bronze Age.

Remarkably well-preserved items littered the winding path, including clothing and shoes, a variety of tools and riding gear, and animal bones and dung. They offer clues about daily life, and hint at the challenges and importance of mountain travel in this region, according to a new study published online April 16 in the journal Antiquity.

“A lost mountain pass is a dream discovery for us glacial archaeologists,” lead study author Lars Pilø, co-director of the Glacier Archaeology Program (GAP), said in a statement. A collaboration between the Innlandet County Council and the Museum of Cultural History at the University of Oslo in Norway, GAP recovers and identifies historical artifacts exposed by disappearing Norwegian glaciers.

The ice patch at the Lendbreen site extends from about 5,500 to 6,300 feet (1,690 to 1,920 meters) above sea level, and the mountain pass rises to nearly 6,500 feet (1,973 m) above sea level, researchers reported. Melt at Lendbreen in 2011 revealed the first evidence of the long-hidden trail, with cairns (human-made piles of stone) marking the route and a shelter at the highest point.

In the new study, scientists documented discoveries that appeared between 2011 and 2015, preserved by the dry, frozen climate and protected by layers of ice (before being exposed). Among the objects were shoes made of hide; a woven mitten and more than 50 pieces of fabric; a walking stick inscribed with runes; a wood-handled knife; horseshoes and sled pieces; and bones from pack horses.

“The preservation of the objects emerging from the ice is just stunning,” study co-author Espen Finstad, an archaeologist with the Department of Cultural Heritage in Lillehammer, Norway, said in the statement.

Dead animals and broken tools were likely abandoned along the path by the travelers, while tools in good condition may have simply been lost, according to the study. The presence of usable clothing among the discarded objects is more puzzling, but these items may have been thrown away by people who were suffering from severe hypothermia, which can cause irrational behavior, the researchers wrote.

Carbon dating of approximately 60 objects indicated that the pass was actively used from around A.D. 300 to A.D. 1500. Some objects, such as a ski and an arrow, dated to the Bronze Age (1750 B.C. to 500 B.C.), and several artifacts were even older. But the items that were most abundant dated to around A.D. 1000 — the Viking Age — suggesting that the mountain pass was busiest during this period.

Unlike many other ancient mountain passes that are known from the Alps and the Himalayas, this route was likely busiest when snow and ice were abundant, as the route would have been difficult for pack animals and sleds to navigate when rocks were bare, according to the study.

By sifting through the objects, scientists reconstructed how people used the path and how that changed over time. What was once a high-traffic roadway during the Viking Age waned in popularity and was all but abandoned by the 16th century, possibly due to climate change-related melting, economic upheaval and the arrival of pandemics from Europe, the researchers wrote.

Another substantial melt event at Lendbreen in 2019 revealed even more intriguing artifacts that are yet to be scientifically described, including the leashed dog remains, “and a wooden box with the lid still on,” Finstad said.