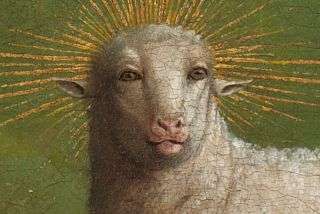 The restored lamb from Jan and Hubert van Eyck’s Ghent Altarpiece gazes into your soul.

“The Adoration of the Mystic Lamb,” a 15th-century masterwork by the brothers Jan and Hubert van Eyck, has finally been restored after three painstaking years of work — and people are freaked out.

Uh, so apparently they restored the Ghent Altarpiece and pic.twitter.com/JljwfEZlzuJanuary 20, 2020

What’s got spectators so baa-listic? Apparently, it’s the titular lamb’s weirdly humanoid face. Take a look at this close-up of the painting pre- and post-renovation, and you’ll see. (Warning: You may have a hard time unseeing it.)

Don’t worry, this is not another “monkey Jesus” screw-up. The lamb’s mannish face is actually part of the original painting, long lost to history, the restorers told The Art Newspaper.

“[The discovery was] a shock for everybody — for us, for the church, for all the scholars, for the international committee following this project,” Hélène Dubois, who led the restoration for the Royal Institute for Cultural Heritage since 2016, told The Art Newspaper.

A bit of background: “The Adoration of the Mystic Lamb” is the centerpiece in a series of 12 panels known as the Ghent Altarpiece, painted for the altar of St. Bavo’s Cathedral in Ghent, Belgium. The lamb in the painting’s forefront symbolizes Jesus. It bears a wound on its breast, similar to the one Jesus received during his crucifixion, and is bleeding into a nearby chalice as crowds of adoring angels look on. The lamb’s face, meanwhile, remains perfectly stoic, as its human-like eyes stare directly out of the painting toward the viewer.

The details all fit with the van Eyck brothers vision — before the lamb’s face was painted over by two other artists during a major restoration in 1550, anyway. Perhaps cathedral visitors at the time shared the opinions of modern critics who find the lamb’s human eyes weird and overly “confrontational,” as the restorers gave the sheep a more naturalistic animal’s face.

While the recent restoration to the van Eycks’ original vision has jarred many observers, those behind the project said they could not be happier.

“When I saw the lamb for the first time as van Eyck painted it, I had to catch my breath,” Dubois told the Flemish newspaper De Standaard. “It is of a shocking beauty. “

The man-faced lamb panel will join several others from the Ghent Altarpiece on display at St. Bavo’s Cathedral in February.