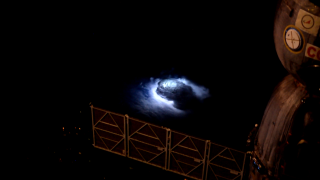 In 2015, astronaut Andreas Mogensen snapped this photo of a thunderstorm from the International Space Station.

Dark fluffy thunderclouds don’t just fuel dramatic storms, they also produce some of the most energetic flashes of light on the planet —  and brilliant sky displays known as ultrasonic “elves.” Now, new findings have painted a clearer picture of what’s going on in the silent interludes of a stormy sky.

For a long time, scientists have been searching for gamma-ray flashes in the deep folds of the universe. In 1994, while peering out into space in search for these signals, a NASA instrument happened to pick up on gamma-ray flashes that were emitted from somewhere closer to home — earthly thunderclouds.

These flashes, the most energetic natural phenomena on our planet, became known as terrestrial gamma-ray flashes (TGFs). They’re created when a thunderstorms’ strong electric field excites atmospheric particles, which then emit radiation. But not much was known about what causes this high-energy phenomenon.

To figure this out, a group of researchers analyzed data from a European Space Agency instrument called the Atmosphere-Space Interactions Monitor (ASIM) aboard the International Space Station. The ASIM is the first instrument to be used for the purpose of detecting TGFs, rather than their even brighter doppelgängers out in deep space, said Torsten Neubert, the head scientist of the ASIM and lead author of a study published Dec. 10 in the journal Science.

Their measurements showed a very specific sequence of events, lasting only a couple of milliseconds long, during a lightning strike. First, they detected an increase in light, which corresponds to the birth of a lightning bolt. During that process, a cloud creates both an electric field and a leader — a path of ionized air. They then detected a big peak in X-rays and gamma-rays, which correspond to the TGF, and then a huge optical pulse, Neubert told Live Science.

This radiation is defined by another weather phenomenon, similar to auroras, called “elves,” in which millisecond-long bursts of visible light and ultraviolet radiation glow in an expanding ring around a lightning strike. These luminous celestial beings, however, are visible only with the most sensitive equipment.

Prior to this study, elves were thought to be unrelated to thunderstorms. Their findings suggest that the same lightning bolt triggers both TGFs and elves, though it’s not clear if TGFs have any role in producing the elves, Neubert said. It’s also not clear if TGFs and elves happen every time lightning strikes, but it likely happens much more often than we can detect, he added.

Another recent finding, published Dec. 10 in the Journal of Geophysical Research Atmospheres, suggests that TGFs happen right before visible lightning. These brilliant flashes occur right before a pulse of electricity shoots through the charged cloud, becoming a lightning bolt, according to a statement. Both of these studies were presented this week at the American Geophysical Union’s annual meeting in San Francisco.

“A lot of stuff is happening within space observations for lightning,” some for monitoring weather and some for understanding the phenomenon, Neubert said. “Taken together [there’s a] truly magnificent couple of years that are coming up.”

Brit who caught coronavirus on honeymoon cruise ‘could be released in...