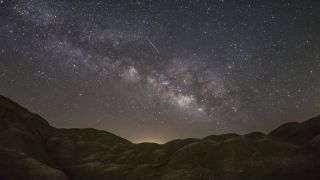 The Lyrid meteors have been visible from Earth for thousands of years.

A breathtaking cosmic light show, the Lyrid meteor shower, peaks this week, and even with social distancing you can be a part of this epic phenomenon.

Meteor showers occur when debris from a comet’s tail vaporizes in our atmosphere, visible from far below as glowing trails of heated atmospheric gas. The glowing trails seen during the Lyrids are fragments of the comet C/1861 G1 Thatcher. These streaming particles of space debris have been visible from Earth for more than 2,600 years, trailing behind the Thatcher comet as it orbits the sun.

The shower usually appears between April 16 and April 25, according to NASA. This year, the peak of the Lyrids will streak the sky with light from tomorrow (April 21), beginning around 10 p.m. local time, until about 5 a.m. Wednesday (April 22), NASA says. Weather permitting, as many as 20 meteor streaks per hour may be visible during this window, according to the European Southern Observatory (ESO).

You don’t need a telescope to see the Lyrids, and they are best viewed in skies that are as dark as possible, away from light pollution. Patience is key to spotting the fleeting streaks of light: «Lie flat on your back with your feet facing east and look up, taking in as much of the sky as possible,» NASA says. «After about 30 minutes in the dark, your eyes will adapt and you will begin to see meteors.»

Viewing conditions are especially favorable this year; the Lyrids’ peak coincides with the new moon (when the lunar disk is invisible to the naked eye), so the flashes of the meteors will stand out even more against the dark sky, says Space.com, a Live Science sister site.

Lyrid meteors, which travel at about 30 miles (49 kilometers) per second, were first described in China around 687 B.C., and their parent comet was identified and named in 1861, according to NASA. Meteor showers are typically named for the constellation where the meteors appear to stream from; that location is known as the radiant. The Lyrids’ radiant is the constellation Lyra and the star Vega, one of the brightest stars in the sky, located about 25 light-years from Earth, Space.com reported.

While Earth’s orbit carries it through the Thatcher comet’s long debris tail once every year, Thatcher’s orbit of the sun takes approximately 415 years, and it won’t be seen in the inner solar system until 2276, according to EarthSky.com.

After the Lyrids pass us by, the next meteor shower will be the Perseids, which are visible in August, NASA says.