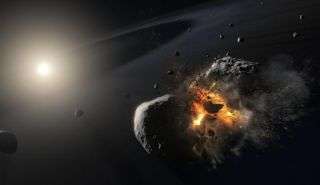 An illustration of the asteroid collision that may have resulted in the formation of Fomalhaut b — an alleged exoplanet that may just be a big cloud of dust.

In 2014, a planet disappeared from the night sky.

The distant world — known as Fomalhaut b and located a neighborly 25 light-years from Earth — was infamous for being one of the first exoplanets ever discovered in visible light by NASA’s Hubble Space Telescope; when astronomers first caught sight of it in 2004 and 2006, the planet appeared as a bright, cool dot moving briskly across the sky. Ten years later, that dot had vanished.

What happened to Fomalhaut b? Did the world have a falling out with its guardian sun (named simply Fomalhaut) and drift away? Did the brilliant planet seek stardom in a bigger, brighter solar system? Or could a nefarious case of planet-on-planet violence be afoot?

A new study published today (April 20) in the journal Proceedings of the National Academy of Sciences (PNAS) proposes a solution to the “Mystery of the Disappearing Exoplanet” — and, befitting of any good detective story, there’s a twist ending.

Perhaps, Fomalhaut b disappeared before the Hubble’s eyes, the study authors wrote, because Fomalhaut b was never a planet in the first place; in this scenario, the object astronomers saw in 2004 and 2006 was actually a colossal cloud of icy debris created by a recent, violent collision between two planetary fragments.

The proposed collision, which likely took place in an icy ring of debris similar to our solar system’s Kuiper Belt, must have occurred very shortly before the Hubble first caught sight of the alleged exoplanet, when the expanding cloud of post-collision dust particles was still densely concentrated and apparent in visible light, the researchers wrote. By 2014, that cloud had already grown large and diffuse enough to disappear from view, the idea goes.

In a way, this cosmic case of mistaken identity makes the discovery of Fomalhaut b even more rare and exciting, lead study author Andras Gaspar said in a statement.

“These collisions are exceedingly rare and so this is a big deal that we actually get to see evidence of one,” said Gaspar, an assistant astronomer at the University of Arizona’s Steward Observatory. “We believe that we were at the right place at the right time to have witnessed such an unlikely event with NASA’s Hubble Space Telescope.”

Now you see it…

For the new study, Gaspar and his colleagues reviewed nearly two decades of archival Hubble observations, which revealed Fomalhaut b slowly growing dimmer and dimmer before completely vanishing in 2014. Using computer models, the researchers calculated that a collision between two icy bodies roughly 125 miles (200 kilometers) in diameter could have created a dust cloud that matched the Hubble observations.

This dust-cloud-in-disguise hypothesis also explains some unusual behavior of the object. For example, the supposed planet’s brightness, which allowed Hubble scientists to see it clearly in visible light, is highly unusual for distant exoplanets, which are often too small to reflect a noticeable amount of light from their home star. On the flip side, Fomalhaut b showed no infrared light signature, meaning it was extremely cold — again, highly unusual for a young planet, which should be warm enough to emit some infrared radiation, the study authors said.

“Clearly, Fomalhaut b was doing things a bona fide planet should not be doing,” Gaspar said.

Meanwhile, both of those observations are consistent with the theory that Fomalhaut b is actually the debris of two icy asteroids that met a cataclysmic end. If that’s the case, the researchers calculated, then that debris cloud has since expanded significantly, and now it has a diameter greater than Earth’s orbit around the sun. Those ever-drifting pieces of leftover ice and dust must each measure smaller than the width of a human hair, far below Hubble’s detection threshold, the researcher wrote.

But it’s too soon to officially close the case of the disappearing exoplanet — researchers will have to study Fomalhaut’s solar system in more detail first. No criminal charges have been brought against either of the asteroids at this time. 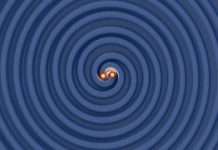