Home Space and Ufo Mysterious ‘Fermi Bubbles’ may be the result of black hole indigestion 6... 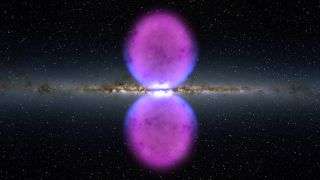 The gargantuan Fermi Bubbles are only visible in gamma-ray light. Where did they come from?

The center of the Milky Way is a puzzle of invisible, interconnected blobs. There are swooping tendrils of energy visible only in radio wavelengths, hourglass-shaped scars of X-ray light and — towering over it all — the mysterious Fermi Bubbles.

These twin orbs of gas, dust and cosmic rays emerge from the galactic center like two wings of an enormous moth, one on either side of the galaxy’s central black hole. From tip to tip, the bubbles stretch about 50,000 light-years across (that’s about half the diameter of the Milky Way itself), yet are visible only in high-energy gamma-ray light.

Where did they come from? Nobody really knows. But a study published May 14 in The Astrophysical Journal argues that the Bubbles, along with the mysterious X-ray and radio structures surrounding the galactic center, are all linked to the same series of black hole belches beginning around 6 million years ago.

Using several computer simulations, the researchers showed that both the Fermi Bubbles and the nearby X-ray structures could have been formed in one fell swoop by a massive shock wave blasting out of the galaxy’s central black hole, also known as Sagittarius A* (or Sgr A*). This shock wave may have begun when the black hole suddenly loosed two enormous jets of ionized matter, flying in opposite directions away from the galactic center at near light-speed. (Astronomers have observed jets like this blasting out of galaxies with big black holes before, though they still aren’t sure why it happens.)

If the jets were wide enough and powerful enough, the researchers wrote, they could have created twin shock waves that blasted through the hot gas on either side of the galactic center. Where the shock waves compressed and heated the gas, the hourglass-shaped X-ray structures formed; the edges of the shock waves, expanding into intergalactic space for thousands of light-years in either direction, formed the Fermi Bubbles. The whole process would have lasted about a million years, the team wrote.

«A forward shock is generated as soon as the jet punches through the ambient halo gas,» the researchers wrote in the study. «[After] 1 million years, the jet is switched off. … After [5 million years], the bubble expands to its current size as observed.»

According to the researchers, the shock-wave hypothesis explains several features of the galactic center, including the extremely high temperatures of the Fermi Bubbles and the fact that the bottom edges of the Bubbles overlap perfectly with the X-ray structures. If a similar, less powerful shock-wave event occurred a few million years later, it could also explain the smaller, bubble-shaped radio structures recently observed at the galactic center, the team added. In other words: These three big, invisible puzzle pieces at the center of the galaxy may fit together much better than scientists previously thought.