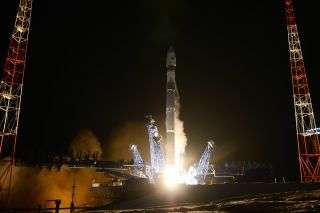 A Russian Soyuz 2.1v rocket launches a classified military satellite into orbit from the Plesetsk Cosmodrome in northern Russian on Nov. 25, 2019. The satellite can apparently track other satellites in orbit.

Russia just fired an anti-satellite missile in a test of technology that the U.S. Space Force considers a threat to American orbital assets.

On Wednesday (April 15), Russia conducted a test of its direct-ascent anti-satellite (DA-ASAT) missile system, which is designed to destroy satellites in low Earth orbit.

The U.S. Space Force also has serious concerns about this recent DA-ASAT missile test. “Russia’s DA-ASAT test provides yet another example that the threats to U.S. and allied space systems are real, serious and growing,” Raymond said in the statement. “The United States is ready and committed to deterring aggression and defending the nation, our allies and U.S. interests from hostile acts in space.”

“This test is further proof of Russia’s hypocritical advocacy of outer space arms control proposals designed to restrict the capabilities of the United States while clearly having no intention of halting their counterspace weapons programs,” Raymond added. “Space is critical to all nations and our way of life. The demands on space systems continue in this time of crisis where global logistics, transportation and communication are key to defeating the COVID-19 pandemic.”

“It is a shared interest and responsibility of all spacefaring nations to create safe, stable and operationally sustainable conditions for space activities, including commercial, civil and national security activities,” he said.

In February, when the two Russian satellites were seen seemingly “stalking” a U.S. spysat, it was the first time in history that the U.S. military publicly revealed an identified, direct threat from another country to a U.S. satellite. Yesterday’s test, as described by Raymond, is another threat to U.S. space systems and resources in low Earth orbit.

However, anti-satellite weapons have also posed an indirect threat to U.S. satellites, because orbital debris, or “space junk,” from damaged and destroyed spacecraft could collide with other satellites in orbit. For example, India launched an anti-satellite test in March 2019 that created at least 60 large pieces of orbital debris that NASA said could have potentially hit the International Space Station, putting astronauts’ lives at risk.

The Space Force, which was allocated $15.4 billion in the Trump administration’s 2021 budget proposal, was created in part to protect such resources. Satellites and technology in low Earth orbit have become increasingly more valuable as tech advances and as countries increasingly adopt space technologies for national security purposes.

This has become especially pertinent for the U.S. as both Russia and China continue to advance their space programs and capabilities in low Earth orbit. Additionally, these actions by Russia could add to political tensions that were already building between Russia and the U.S. because of allegations that Russia interfered in the 2016 U.S. presidential election.

In addition, Russian officials continue to trumpet the development of advanced, potentially threatening military technology, including a hypersonic weapon and a 100-megaton nuclear torpedo.

End of the world: Coronavirus is tip of the iceberg –...