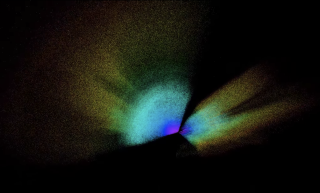 This map shows 11 billion years of the universe’s history, with galaxies closest to Earth appearing in purple and blue, and distant galaxies in yellow and red.

After five years of peering into the deepest reaches of space, researchers have released what they call the “largest three-dimensional map of the universe” ever. No, you cannot see your house.

The mind-boggling map is the result of an ongoing project called the Sloan Digital Sky Survey (SDSS) — an ambitious, international quest to map the expansion of the observable universe, and hopefully solve a few cosmic conundrums in the process. With this newest update, the project has mapped and measured more than 2 million galaxies, stretching from our Milky Way to ancient objects more than 11 billion light-years away.

The detailed new map will help astronomers piece together a murky period of the universe’s expansion known as “the gap.”

“We know both the ancient history of the universe and its recent expansion history fairly well, but there’s a troublesome gap in the middle 11 billion years,” Kyle Dawson, a cosmologist at the University of Utah and lead researcher of the project,  said in a statement. “For five years, we have worked to fill in that gap.”

The gap begins a few billion years after the Big Bang. Scientists are able to measure the rate of the universe’s expansion before this thanks to the cosmic microwave background — ancient radiation left over from the infancy of the universe that researchers can still detect; and they can calculate recent expansion by measuring how the distance between Earth and nearby galaxies increases over time. But expansion in the middle period has been little studied because the light of galaxies more than a few hundred million light-years away can be incredibly faint. To fill in the gap, a team of more than 100 scientists from around the world looked at not just distant galaxies, but also bright-burning quasars (extremely luminous objects powered by the hungriest black holes in the cosmos).

Key to this survey is a phenomenon called redshift — a process by which light from the most ancient, distant galaxies is literally stretched by the expansion of the universe, increasing its wavelength and shifting it toward the redder end of the spectrum. As a result of this cosmic color-change, distant light sources appear redder, while those nearer to Earth look bluer (you can see this phenomenon illustrated in the team’s maps above).

-The 15 weirdest galaxies in our universe

-The 12 strangest objects in the universe

To calculate the rate of cosmic expansion 11 billion years ago, the team measured the redshift of millions of distant objects along with their velocities — a measurement that shows how much a galaxy is being tugged by the gravity of other matter around it. The team’s results, which are described in 23 new studies released on July 20, show that the universe began expanding at an increased rate about 6 billion years ago, following a period of deceleration.

Scientists attribute the universe’s expansion to a mysterious force called dark energy, though no one is entirely sure what it is or where it exists. Surveys like this one help scientists better constrain the properties of dark energy, the researchers said, though it remains far from understood. The solution to that conundrum will have to wait for another day … hopefully one not too many billions of years away.