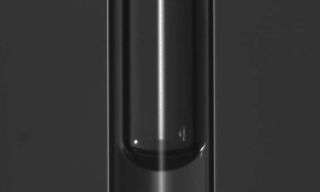 A student just solved the mystery of why bubbles appear stuck in thin vertical tubes.

A university student recently solved a question that’s puzzled physicists for over half a century: Why do gas bubbles appear to get stuck inside narrow vertical tubes? The answer may help explain the behavior of natural gases that are trapped in porous rocks.

Years ago, physicists noticed that gas bubbles in a sufficiently narrow tube filled with liquid did not move. But that’s “kind of a paradox,” said senior author John Kolinski, an assistant professor in the department of mechanical engineering at the Swiss Federal Institute of Technology Lausanne (EPFL).

That’s because the gas bubble is less dense than the liquid surrounding it, so it should rise to the top of the tube (just as  air bubbles in a glass of sparkling water will rise to the top). What’s more, the only resistance to flow in a liquid comes when that liquid is moving, but in this case the fluid is standing still.

To solve the case of the stubborn bubble, Kolinski and Wassim Dhaouadi, who was an undergraduate engineering student working in Kolinski’s lab at the time and is now completing a master’s degree at ETH Zurich, decided to probe it using a method called “interference microscopy.” This method is the same one that’s used by the Laser Interferometer Gravitational-Wave Observatory (LIGO) detector to find gravitational waves, Kolinski said.

But in this case, the researchers used a custom-made microscope that shines a light onto the sample and measures the intensity of the light that bounces back. Because light bounces back differently based on what it hits, measurements of the light bouncing back can help researchers figure out how “thick” a material is. In this way, they probed a buoyant bubble trapped inside a thin tube filled with an alcohol called isopropanol. The alcohol allowed them to have a “self-cleaning experiment,” which was necessary because the results would have been messed up by any kind of contamination or dirt, Kolinski said.

Starting with a scientist named Bretherton in the 1960s, researchers probed this phenomenon theoretically, but it was never directly measured before. Some calculations suggested that the bubble is surrounded by an extremely thin layer of liquid touching the sides of the tube, which slowly diminishes in size and eventually disappears, Kolinski said. That thin layer would create resistance to the motion of the bubble as it tries to rise.

The researchers indeed observed this very thin layer around the gas bubble and measured it to be about 1 nanometer thick. That’s what quenches the movement of the bubble as theoretical work had predicted. But they also found that the liquid layer (which forms because the pressure in the gas bubble pushes against the walls of the tube) doesn’t disappear, but rather stays at a constant thickness at all times.

Based on their measurements of the thin layer of fluid, they were also able to calculate its velocity. They found that the gas bubble isn’t stuck at all but is rather moving “extraordinarily slowly,” at a pace invisible to the naked eye, due to the resistance caused by the thin layer, Kolinski said. However, they also found that by heating up the liquid and bubble, they were able to make the thin layer disappear — a novel idea that could be “exciting” to explore in future research, he added.

Their findings could help inform the earth sciences field. “Whenever you have a gas that’s confined in a porous medium,” such as natural gas in porous rock, or if you’re trying to go the opposite direction and trap carbon dioxide inside rock, then you have lots of gas bubbles that are in confined spaces, Kolinski said. “Our observations are relevant to the physics of how these gas bubbles are confined.”

But the other part of the excitement is that this study shows “you can have people at all stages of their career making valuable contributions,” Kolinski said. Dhaouadi “drove the project toward a successful outcome,” Kolinski said.

The findings were published Dec. 2 in the journal Physical Review Fluids.