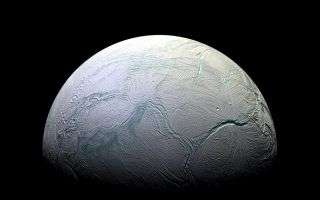 Enceladus has strange, parallel “tiger stipes” at its south pole.

New research solves some of the mysteries of the “tiger stripes” on Saturn’s moon Enceladus.

The moon has been of particular interest to scientists ever since it was observed in detail by NASA’s Cassini spacecraft. With Cassini’s data, scientists detected an icy, subsurface ocean on the moon and strange, tiger stripe markings on the moon’s south pole that are unlike anything else in the solar system. Icy material from Enceladus’ ocean spews into space through these stripes, or fissures, in the moon’s surface.

“First seen by the Cassini mission to Saturn, these stripes are like nothing else known in our solar system,” lead author Doug Hemingway said in an emailed statement. “They are parallel and evenly spaced, about 130 kilometers long and 35 kilometers apart. What makes them especially interesting is that they are continually erupting with water ice, even as we speak. No other icy planets or moons have anything quite like them.”

In the new study, Hemingway and colleagues Max Rudolph of the University of California, Davis, and Michael Manga of UC Berkeley used models to uncover the physical forces on the moon that cause these fissures to form and keep them in place. The team was also keen to figure out why these cracks are evenly spaced and only on the south pole of Enceladus.

The moon isn’t frozen solid, because the gravitational changes caused by its eccentric orbit around Saturn stretches it out slightly. This deformed shape causes the ice sheets at the poles to be thinner and more susceptible to splitting open, they found. This led them to conclude that the fissures that make up these tiger stripes could have formed on the moon’s north pole just as well as the south pole, but the south pole  just cracked first.

They also found that the stripes are parallel because, after the first stripe (named for the city of Baghdad) split open, it stayed open. So ocean water spewed from it, which caused three other, parallel cracks to form as ice and snow built up along the edges of the first fissure as water jets froze and fell back down. This weight built up pressure and caused the new cracks.

“Our model explains the regular spacing of the cracks,” Rudolph said in the statement. He further explained that the weight of the icy material falling back to the edges of the first crack “caused the ice sheet to flex just enough to set off a parallel crack about 35 kilometers (22 miles) away.”

They additionally found that the cracks stay open and continue to erupt in part because of the tidal effects of Saturn’s gravity which changes with the moon’s strange orbit. The fissures continue to widen and narrow, bringing water through them. This prevents them from closing up for good.

“Since it is thanks to these fissures that we have been able to sample and study Enceladus’ subsurface ocean, which is beloved by astrobiologists, we thought it was important to understand the forces that formed and sustained them,” Hemingway said. “Our modeling of the physical effects experienced by the moon’s icy shell points to a potentially unique sequence of events and processes that could allow for these distinctive stripes to exist.”

This work was published Dec. 9 in the journal Nature Astronomy.

Chelsea Gohd joined Space.com as an intern in the summer of 2018 and returned as a Staff Writer in 2019. After receiving a B.S. in Public Health, she worked as a science communicator at the American Museum of Natural History. Chelsea has written for publications including Scientific American, Discover Magazine Blog, Astronomy Magazine, Live Science, All That is Interesting, AMNH Microbe Mondays blog, The Daily Targum and Roaring Earth. When not writing, reading or following the latest space and science discoveries, Chelsea is writing music, singing, playing guitar and performing with her band Foxanne (@foxannemusic). You can follow her on Twitter @chelsea_gohd.