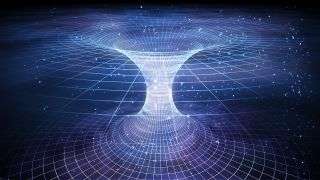 Wormholes, or tunnels in the fabric of space-time, are ferociously unstable. As soon as even a single photon slips down the tunnel, the wormhole closes in a flash.

But what if the problem was that our imagined wormholes weren’t quite weird enough?

A new study suggests that the secret to a stable wormhole is making them funny looking. By shaping the wormhole so that it’s not a perfect sphere, we might be able to hold that tunnel open for long enough to travel through. The only catch is that said wormhole would have to be incomprehensibly tiny.

Wormholes, if they exist, would allow you to travel from Point A to some extremely distant Point B without bothering with all the arduous traveling from Point A to Point B. They’re a shortcut. A cheat-code to the universe. See a star millions of light-years away? You could reach it in just a few minutes, if you had a wormhole linking you to that star.

No wonder it’s a staple of science fiction.

But wormholes aren’t just figments of our imagination designed to cut out all the boring parts of interstellar travel (which is most of it). They are born from the mathematics of Einstein’s general theory of relativity, our modern understanding of how gravity works. In that language, matter and energy bend and warp the fabric of space-time. In response, the bending and warping of space-time informs matter how to move.

So when it comes to wormholes, you simply need to ask yourself: Is it possible to bend space-time in such a contorted way that it folds over on itself, forming a short-distance tunnel between two otherwise distant points?

The answer, discovered in the 1970’s, is a surprising yes. Wormholes are entirely possible and allowed within the framework of general relativity.

One catch: They tend to fall apart, immediately after they form.

The keys to stability

Wormholes are so unstable because, in essence, they consist of two black holes touching each other, connected at their singularities to form a tunnel.

But singularities are bad news: They are points of infinite densities. And they are surrounded by regions known as the event horizon, one-way barriers in the cosmos. If you cross a black hole’s event horizon, you’ll never escape.

In order to overcome this problem, the entrance to a wormhole must be outside of the event horizon. This way you can traverse the wormhole without plunging through an event horizon and never escaping.

But as soon as you enter such a wormhole, there’s simply too much mass hanging around, and the gravity of your presence distorts the wormhole tunnel, causing it to collapse in on itself, snapping shut like an overstretched rubber band, leaving behind two solitary black holes separated in space (and presumably bits of your corpse scattered across the observable universe).

It turns out that there is a way to keep the wormhole entrance away from the event horizon and keep it stable enough for you to travel through. One catch: The solution requires the presence of a material with negative mass. Negative mass is just like normal mass, but with a minus sign. And if you collected enough negative mass together in a single spot, you could use it to hold open a wormhole.

But as far as we know, matter with negative mass doesn’t exist. We have no evidence for it, and if it did exist it would violate a lot of laws of the universe, like inertia and the conservation of momentum. For example, if you kicked a negative-mass ball, it would fly backward. If you put a negative-mass object next to a positive-mass object, instead of attracting, they would repel each other, instantly accelerating away from each other to infinity.

Since negative mass appears to be a no-go in the cosmos, at first glance it looks like wormholes are unlikely to exist in the universe as well.

A quantum of solace

But that story of wormholes relies on the mathematics of general relativity, which is, like I said, our current understanding of how gravity works.

That is, our current, incomplete understanding of how gravity works.

We know that general relativity doesn’t describe all the gravitational interactions in the universe, because it falls apart when gravity becomes very strong over small scales (like, say, the singularities inside of black holes). To solve those situations, we need to turn to a quantum theory of gravity, which would meld our understanding of the world of subatomic particles with our larger-scale understanding of gravity. And that, we don’t have, since every time we try to piece one together it falls apart into nonsense.

But still, we have some clues about how quantum gravity might work, and the more we learn, the more we can understand about the potential feasibility of wormholes. It could be that a new-and-improved understanding of gravity would reveal that you don’t need negative-mass matter at all, and that stable, traversable wormholes are A-OK.

A pair of theorists at Tehran University in Iran published a new investigation of wormholes to the preprint database arXiv. They applied some techniques that allowed them to study how quantum mechanics might alter the standard general relativity picture. They found that traversable wormholes might be allowed without negative-mass matter, but only if the entrances were stretched a little bit from pure spheres.

While the results are interesting, there is one catch. These hypothetical traversable wormholes are tiny. As in, extremely tiny. The wormholes would be at most 30% larger than the Planck length, or 1.61 x 10^minus 35 meters. And that means the traveler can’t be any bigger than that.

Oh, and the wormhole traveler has to be blazing along at nearly the speed of light.

While limited, the new research does open a tiny crack in the feasibility of wormholes that could be opened with further work. And then maybe TV show writers won’t have to gloss over any technicalities anymore.