Home Space and Ufo Welcome to Armageddon: Meet the city behind the biblical story 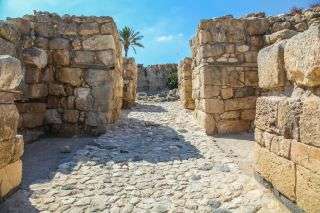 Remains of the entrance gate to the ancient city of Megiddo, otherwise known as Armageddon.

Megiddo is an archaeological site that was inhabited between roughly 7000 B.C. and 300 B.C. Numerous battles were fought near Megiddo during that time, and the Book of Revelation, which refers to the site as Armageddon, prophesied that a final battle at the end of time would take place there.

“Megiddo is mentioned a dozen times in the Hebrew Bible, and in a multitude of other ancient texts, but it is especially well-known as the setting in the New Testament for the penultimate battle between the forces of good and the forces of evil,” wrote Eric Cline, a professor of classical and Near Eastern languages and civilizations at George Washington University, in his book “Digging up Armageddon: The Search for the Lost City of Solomon” (Princeton University Press, 2020).

The name Armageddon comes from the Hebrew word “Har Megiddo,” which means the “mountain of Megiddo,” according to Cline. “By the Middle Ages, multiple nationalities, languages, and centuries had added an ‘n’ and dropped the ‘h’, transforming Har Megiddo to Harmageddon and thence to Armageddon,” Cline wrote.

A mound of history

Today, visitors to the site will see that much of it is a “tell” (also spelled tel) , or  a mound made from the remains that humans have left behind over thousands of years.

“Within the mound itself, we now know, are the remains of at least 20 ancient cities, built one on top of another,” Cline wrote. “There have actually been numerous Armageddons at the ancient site of Megiddo already, as one civilization, group or political entity gave way to another over the millennia — one world ending and another beginning.”

Many battles have been fought at, or near Megiddo. For example, Egyptian pharaoh Thutmose III, female pharaoh Hatshepsut’s nephew and step-son who succeeded her and  reigned 1479–1425 B.C., defeated a coalition of cities near Megiddo. His victory resulted in Egypt taking over a sizable portion of the eastern Mediterranean.

Another important battle took place when King Josiah of Judah fought Egyptian Pharaoh Necho II (reign 610–595 B.C.) near Megiddo. It resulted in the defeat of Judah and the death of king Josiah. Judah was substantially weakened and was destroyed a few decades later by Babylonian king Nebuchadnezzar II.

Even in modern times, Megiddo has seen significant battles. In September 1918, during World War I, an allied army led by general Edmund Allenby defeated an Ottoman army near Megiddo. The loss was so crushing that the Ottoman Empire was forced to request an armistice shortly afterward.

Megiddo was a place worth fighting over because the site is located at the crossroads of the Jezreel Valley, an important, strategic location that overlooked several trade routes, wrote archaeologist and The University of Iowa religious studies professor Robert Cargill, in his book “The Cities that Built the Bible” (HarperOne, 2016).

“The valley was extremely important to the ancient world, because whoever controlled Megiddo controlled the trade route between Egypt, Europe and Mesopotamia,” Cargill wrote. “These preferred trade routes and the epic battles fought to secure — and tax — them have shaped the history of the Holy Land and are the reason that Megiddo has the reputation it does as a famous battlefield.”

In the Book of Revelation, “Megiddo was identified as the location of the end of the world because it had been the epicenter of armed conflict throughout Israel’s history,” Cargill explained.

Many archaeological discoveries have been made at Megiddo over the past century. Some of the most important were made by the University of Chicago’s expedition that ran from 1925 to 1939. The story behind the expedition is documented in Cline’s book.

One of the expedition’s more famous discoveries was a series of “stables,” which the excavators thought were built by King Solomon (today, most archaeologists believe that someone other than Solomon built them).

Another important find made by the Chicago expedition was the “Megiddo Ivories” — about 382 ivory objects found beside human and animal burials. Some of the ivories have Egyptian hieroglyphic inscriptions on them, such as an ivory pen case which says that it belongs to an Egyptian official named “Nakht-Amon” who was a “king’s messenger” during the reign of pharaoh Ramses III (1184–1153 B.C.). Other ivory objects include gaming boards, combs and boxes. The purpose of the large number of ivory goods is a source of debate among scholars, with one possibility being that they are part of a burial. The ivories were carved using a mix of Hittite, Mycenaean, Egyptian, Ugaritic, Canaanite and Assyrian artistic motifs, Cline wrote.

Another important find, made recently by the Tel Aviv University Megiddo Expedition, is a “Great Temple” that dates back to around 3000 B.C. According to the researchers’ reconstruction published in the American Journal of Archaeology in 2014, the main building of the Great Temple includes an enormous, rectangular room with two corridors behind it. The researchers also found evidence of cultic activity that took place at the temple. Basalt slabs found inside the temple “appear to have been essential elements in the cult, probably acting as tables for offerings or for placing cult fetishes,” the researchers reported. The “Great Temple has proven to be the most monumental structure of the period” in that area of the Eastern Mediterranean, the researchers wrote.

As a site of so many battles, it’s not surprising that multiple archaeological finds reveal that Megiddo was heavily fortified at times.

The Chicago expedition found an elaborate series of gates that they believed dated to the time of King Solomon, or about 970–930 B.C. “The gates are significant because they incorporate two large towers at the front, which were typically topped with archers, and chambers within the gate that could be filled with soldiers holding lances, spears and swords to greet any enemy lucky enough to make it through the gate’s doors,” Cargill wrote. When the gate system was erected is a matter of debate among scholars today.

The Chicago expedition also found a tunnel system that carried water from a nearby spring inside a cave to the site of Megiddo. The tunnel starts down a shaft that’s about 100 feet (30 meters) deep, then runs 150 feet (46 m) straight to the spring, Cline wrote. The tunnel system “is perhaps the most impressive engineering achievement at Megiddo,” Cargill wrote, noting that the design of the tunnel allowed the inhabitants to have access to water when the city was under siege.

Archaeological work continues today, and is led by archaeologists from Tel Aviv University in Israel. The site draws thousands of tourists every year, many of them attracted to the site by the prophecy of the end-of-times battle that is supposed to take place at the site. According to Cline, tour guides at the site often greet their guests by saying “Welcome to Armageddon.”