Home Space and Ufo What Were George Washington’s Teeth Made Of? (It’s Not Wood) 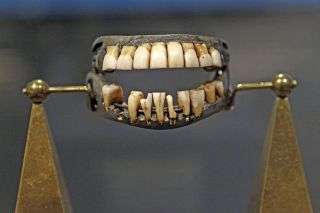 Dentures worn by George Washington are not made of wood, as one tale suggested. Here, they are on display at the N.C. Museum of History in Raleigh.

The myth of George Washington’s wooden chompers is as enduring as the tall tale of the time the young future president chopped down a cherry tree and came clean about his crime. It’s also just as false.

In fact, Washington had multiple sets of dentures, and they were made of ivory, metal alloys and — most disturbingly — the teeth of other humans, quite possibly slaves. According to the Mount Vernon Ladies’ Association, Washington’s documents show that he purchased toothbrushes and tooth powders beginning at least in his early 20s, but to no avail. His first tooth was pulled in 1756, when he was just 24. By 1781, Washington was wearing partial dentures, and by 1789, he had only one tooth left in his mouth. That year, he started wearing full sets of dentures made from ivory and human teeth.

These teeth were quite possibly purchased at cut-rate prices from slaves or, in the very best case, from desperately poor people, said Kathryn Gehred, a research specialist at the University of Virginia who has written about Washington’s teeth.

«George Washington probably gave his inaugural speech with teeth that were from people who were enslaved,» Gehred told Live Science. «It’s grim.»

The story of Washington’s dental woes resonates even today because of the legacy of slavery and continuing debates over America’s founding and the Founding Fathers’ place in history. During his presidency, Washington was politically ambivalent about slavery; he signed some legislation, like the Slave Trade Act, that attempted to put some limits on the institution in the United States, but he also signed into law the Fugitive Slave Act, which allowed slave owners the right to come into slavery-free states to capture fugitive slaves.

Personally, however, Washington was a slave owner, and a standard one of his time, Gehred said: He bought and sold people, tried to chase them down when they ran away and, when he was living in the abolitionist city of Philadelphia, used legal loopholes to keep his slaves from meeting residency requirements that would have granted them freedom.

By the time of his death, Washington had 317 living slaves, according to historians at Mount Vernon. In May 1784, he certainly purchased teeth (nine of them) from some of his slaves. A notation in his ledger book on the «credit» side says «By Cash pd Negroes for 9 Teeth on Acct of Dr. Lemoire.» [Map of the Birthplaces of the Presidents (Infographic)]

«Dr. Lemoire,» Gehred said, was a reference to Dr. Jean Le Mayeur, one of Washington’s dentists, with whom he subsequently corresponded about purchasing a set of dentures. There’s no way to be sure that the nine teeth bought from the slaves ended up in the dentures, Gehred said, but it’s possible that Washington and a dentist struck a deal in which Washington would buy teeth at cut-rate prices from the people he owned in order to bring down the overall cost of the dentures.

Surviving newspapers feature ads by Le Mayeur seeking people willing to have their teeth pulled for cash; one, from Richmond in 1785, offers two guineas per front tooth, «slaves excepted.» At that rate, the nine teeth bought from Washington’s slaves should have cost 19 British pounds, Gehred said. Washington paid only about 6 pounds.

«The fact is, these are people who are desperate enough that they are selling their teeth to a dentist, and they’re not being paid as much as a white person,» Gehred said.

One set of Washington’s dentures, containing human teeth from an unknown mouth or mouths, remains in the collection at Mount Vernon.

Near death experience: ‘I thought I was being abducted by aliens’...

Trying to conceive: 10 tips for women