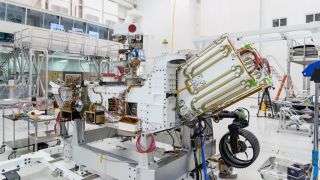 NASA’s Perseverance Mars rover displaying where its MMRTG would be inserted, between the panels on the right marked by gold tube, before the power system was inserted.

A spacecraft is only as strong as its power source, which is why when NASA was designing its Perseverance Mars rover, the agency turned to radioactive plutonium.

The plutonium that blasted off the planet this morning (July 30) isn’t in the same form as is used for weapons, and it’s well protected in case something happens to go wrong during the launch. But these plutonium units are a respected power source for spacecraft — NASA’s Curiosity rover runs on a similar device.

“NASA likes to explore, and we have to explore in some very distant locations, dusty locations, dark locations and harsh environments,” June Zakrajsek, a nuclear fuel expert at NASA’s Glenn Research Center in Ohio, said in a Department of Energy (DOE) podcast about the Perseverance mission. “When we’re in those kinds of environments, solar energy sometimes does not provide the power that we need. The light just does not get to those locations like we would need it.”

Some NASA missions to Mars have run on solar energy, of course — the InSight lander currently operating on the Red Planet bears solar panels, as did the twin Spirit and Opportunity rovers earlier this century. But Opportunity is a mascot for the weaknesses of solar energy at Mars, since the rover’s end came when a massive global dust storm blocked it from tapping into the sun’s light. Run a rover on nuclear power and you don’t have to worry about that scenario.

So for the Perseverance rover, NASA turned to plutonium in a system called a Multi-Mission Radioisotope Thermoelectric Generator (MMRTG), which should be able to power the spacecraft for about 14 years.

“You don’t have extension cords, you can’t run out for a repairman,” Bob Wham, a nuclear fuel expert at Oak Ridge National Laboratory, said in the same podcast. “You have to be totally reliable.”

Like the rest of the Perseverance rover, the MMRTG is based heavily on that of the Curiosity rover, which launched in 2011, landed on the Red Planet in 2012, and has been steadily chugging along ever since. Perseverance’s MMRTG has been in the works for seven years, nearly as long as its predecessor has been powering Curiosity, and carries a price tag of $75 million, according to the DOE.

(Nuclear power sources of other varieties have also traveled to deep space on missions like the forty-year-old twin Voyager probes and the Cassini spacecraft that dived through Saturn’s rings.)

Perseverance’s MMRTG is designed to produce 110 watts of power, about the same as is used by a light bulb. The plutonium will decay, emitting heat that a generator converts into energy to power all of the rover’s instruments, plus producing enough heat to protect the spacecraft from the freezing nights and winters on Mars.

The plutonium began as a different element entirely, neptunium, which scientists irradiated with neutrons in a nuclear reactor for nearly two months to convert it to the plutonium form needed for the MMRTG. The plutonium is then combined with ceramic, making a safer compound than is used in weapons.

Nevertheless, putting a nuclear power source at the tip of a rocket still prompts some cautionary measures. Most importantly, each pellet of plutonium is encased in iridium, which would contain the radioactive material if it fell back to Earth. According to NASA and the DOE, that’s happened to space-bound nuclear power sources on three occasions, none of which caused any damage, with one of the power sources even being fished out of the ocean for later use on another mission.

NASA beefs up the mission control teams for such launches with additional personnel to coordinate any necessary response to the nuclear aspect of the mission. For the Perseverance launch, the government modeled a whole host of things that could go wrong on launch day — covering everything from an issue before liftoff that would have relatively compact geographic impact to a problem in Earth orbit that keeps the spacecraft from leaving for Mars.

Both of these scenarios had a probability below 0.1%, according to the government’s models, and if an issue had occurred during launch, those calculations suggested that even the most concentrated radiation exposure would have been equivalent to about eight months of background radiation experienced by people living in the U.S.

And so Perseverance was loaded with an MMRTG containing 32 hot, silvery lumps of fuel, before it blasted off toward the Red Planet.

Unlike Curiosity’s plutonium, some of that aboard Perseverance is relatively fresh and U.S.-made. The form of plutonium used on these missions began as a byproduct of nuclear weapon production processes, according to reporting by Slate after Curiosity’s landing, and the U.S. government stopped creating its own supply of this plutonium in the 1980s, having decided it could access enough for its needs.

But lately, NASA has been stuck rationing out the power sources, which is why the DOE decided in 2015 to get back in the business of making plutonium — up to 14 ounces (400 grams) each year right now, with an eye on being able to make 3.3 lbs. (1.5 kilograms) each year by 2026, according to the DOE.

As to where that plutonium will go, one future nuclear-powered NASA mission is already in the works. The agency’s Dragonfly mission, a drone bound for Saturn’s strange large moon, Titan, will be powered by an MMRTG. That spacecraft is scheduled to launch in 2026. 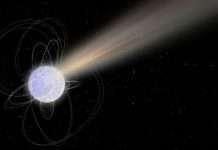 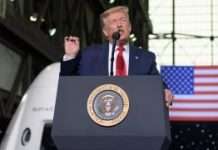 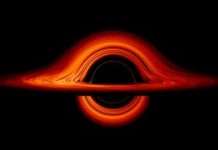 Why Do People Have Different Personalities?