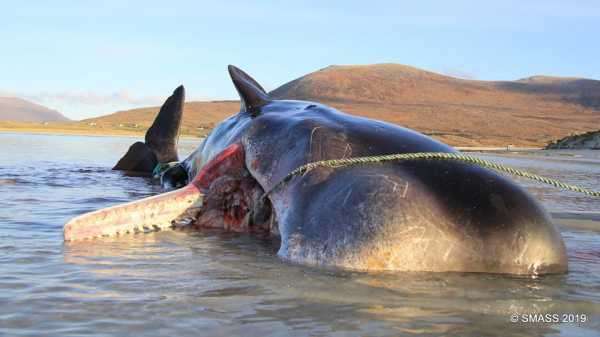 The whale stranded while still alive and had been dead for about 48 hours before experts with the Scottish Marine Animal Stranding Scheme performed a necropsy.

When workers with a whale strandings agency in Scotland performed a necropsy on a recently beached sperm whale, they found a gruesome surprise: The animal had died with around 220 lbs. (100 kilograms) of trash in its stomach.

. By performing necropsies and studying the remains of beached marine life — sharks, porpoises, dolphins, sea turtles and seals, as well as whales — scientists can better understand the biological and environmental conditions that lead to strandings.

While the amount of garbage inside the whale was “horrific,” the animal appeared to be in good health and wasn’t malnourished, according to the post. It’s likely that the trash ball interfered with digestion, but SMASS experts didn’t find any signs that the ingested debris blocked the whale’s intestines. 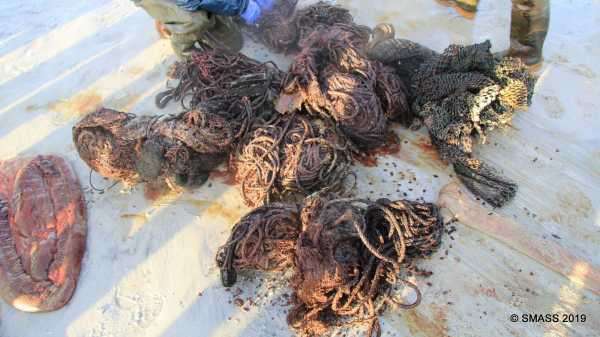 Inside the whale was a condensed mass of fishing debris and land trash.

Other grim examples of dead whales with bellies full of plastic have washed up on other countries’ shores. A pregnant sperm whale that floated up to an Italian beach in April died with 49 lbs. (22 kg) of trash in her stomach, and a Cuvier’s beaked whale that beached in the Philippines in March had swallowed 88 lbs. (40 kg) of trash. Sperm whales that beached in 2018 in Spain and Indonesia carried similarly indigestible masses in their guts, Live Science previously reported.

In the United Kingdom, stranded marine animals commonly have microplastic particles in their bodies, though it’s unknown how this affects their overall health, researchers reported in January in the journal Nature. But beached animals with quantities of large debris in their bellies are rare in the coastal U.K., SMASS Stranding Coordinator Nick Davison told Live Science.

In the recent stranding, the assortment of trash in the sperm whale’s gut underscores the global issue of widespread marine pollution caused by a range of human activities — on land and in the seas, according to the Facebook post.

“This whale had debris in its stomach which seemed to have originated from both the land and fishing sectors, and could have been swallowed at any point between Norway and the Azores,” SMASS representatives wrote on Facebook. “We are looking in more detail to see if we can work out quite why this animal ended up with so much of it in its stomach.”