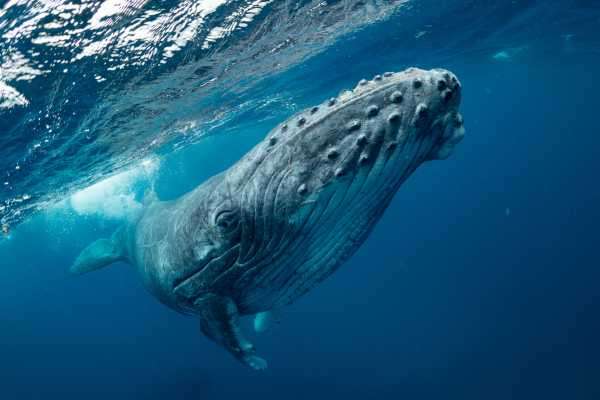 Two snorkelers were hospitalized after being smacked by the fins of an angry mama humpback whale off the coast of Australia, news outlets reported on Tuesday (Aug. 4).

The snorkelers were swimming with a whale-watching tour group on Saturday (Aug. 1) near Ningaloo Reef in Western Australia. The reef is a hotspot for marine animal migrations, including elusive whale sharks, which flock to the area every spring.

The snorkelers were watching a humpback whale mother and calf swim by when the mother began exhibiting defensive behaviors, Australian news site Perth Now reported. The 50-foot-long (15 meters) whale swam at the snorkelers, lashing at the water with her tail. One of the snorkelers, a 29-year-old woman, was struck by the whale’s tail, which fractured her ribs and caused internal bleeding, paramedics told the BBC. She was flown to a Perth hospital, where she remains in serious but stable condition as of Tuesday.

A second woman was slapped by the same whale’s pectoral fin, which tore her hamstring.

Chartered whale-watching tours of Ningaloo are currently in the midst of a seven-year trial program monitored by the Australian Department of Biodiversity, Conservation and Attractions (DBCA). Normally, swimmers are not allowed within 330 feet (100 m) of whales in Australia, according to the DBCA website. However, tourists participating in licensed whale-swimming tours are exempt from these rules.

Whale album: Giants of the deep

Like most animals, humpback whales have strong defensive instincts when it comes to protecting their young. Mother whales are known to put themselves in harm’s way to shield calves from hungry sharks — and occasionally, they’ve even been spotted trying to shield humans or seals from nearby predators. This “unintentional altruism” likely arises from a behavioral rule to protect calves from nearby threats at all costs, marine biologist Robert Pitman previously told Live Science.

As such, swimming in close proximity to humpback whales — which can weigh more than 36 tons (33 metric tons) — “involves some inherent risk,” the DBCA said in a statement following the incident.

Here’s exactly how T. rex grew from a slender tot into...