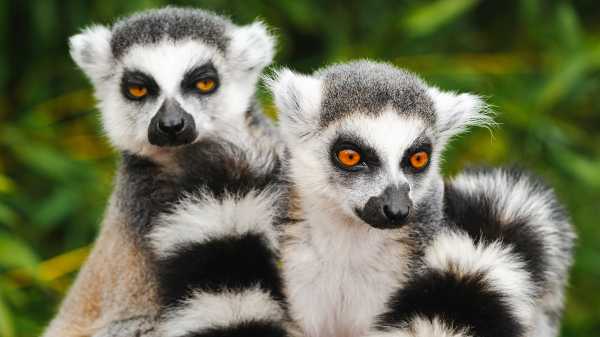 Males produce this smelly secret ingredient in their wrist glands, which they then rub on their tails and waft as a scent cloud toward a likely mate. Secretions from these and other glands are commonly used by male lemurs to communicate with other males — to mark territory, demonstrate their social rank or broadcast their readiness for breeding — but scientists recently discovered that lemurs produce additional chemicals that are used to “stink flirt” with females during their yearly mating season.

This could represent the first evidence of sex pheromones in primates, the group that includes lemurs, great apes and humans, the researchers reported in a new study.

Female ring-tailed lemurs (Lemur catta) seemed especially interested in the males’ wrist secretions during breeding season. This hinted that there might be a chemical component that was present only at this time of year, and that was specifically attractive to females, said co-lead study author Kazushige Touhara, a professor in the Department of Applied Biological Chemistry at the University of Tokyo.

“Most studies of animal communication are done by ecologists,” Touhara said in a statement. “What made our study different is that we have expertise in chemistry.” 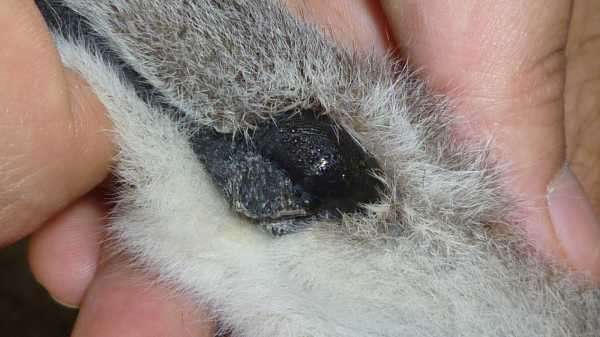 Glands on the wrists of male lemurs release a clear liquid containing odors that may attract females. Multiple odor molecules were identified and studied as potential sex pheromones. “Fruity, floral and sweet”

The scientists collected samples of wrist secretions from three male lemurs during breeding and nonbreeding seasons. For most of the year, this liquid smelled “bitter,” “leathery” and “green” to the human nose, the researchers wrote in the study. But during the breeding season, it smelled “more fruity, floral and sweet.” As ring-tailed lemurs are sensitive to olfactory cues, this scent change could signal to females that males are ready to mate.

Female lemurs were even attracted to the floral and fruity scent when it was presented to them on a cotton pad, sniffing the breeding season secretions for longer and more avidly than they did with pads that held secretions from other months, the scientists reported. 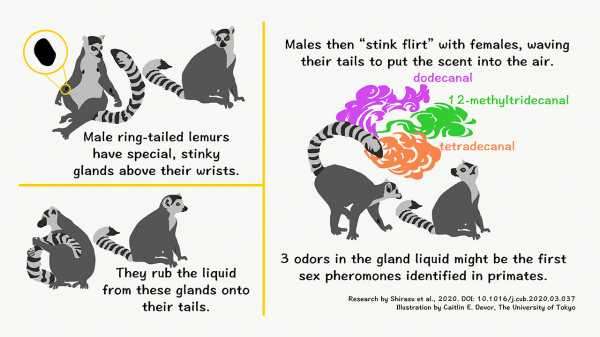 A research team led by the University of Tokyo analyzed the odors that male ring-tailed lemurs use when “stink flirting” with females.

Chemical analysis revealed three types of odor molecules known as aldehydes that were significantly more abundant in the male lemurs’ cologne when breeding season rolled around. The researchers suspected that fluctuations in testosterone might drive these changes; when they boosted testosterone levels in a young male lemur during the nonbreeding season, scent-changing compounds in the animal’s wrist glands spiked to levels typically found when males were ready to mate.

“This increase really supports the connection between testosterone and these odor compounds,” co-lead study author Mika Shirasu, an assistant professor at the University of Tokyo’s Graduate School of Agricultural and Life Sciences, said in the statement.

“Curiosity does not necessarily mean sexual attraction. We cannot say for certain yet if a female spending a longer time interested in the scent means that a male will be more successful at mating,” he explained.

The findings were published online April 16 in the journal Current Biology.