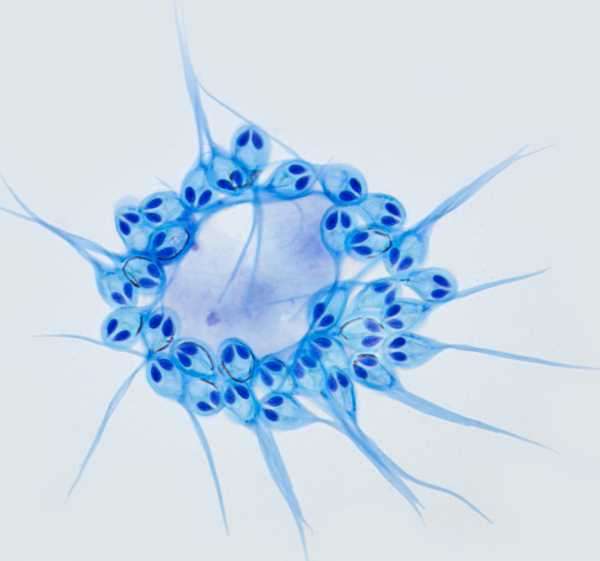 Spores of the parasite H. salminicola swim under a microscope. Those alien “eyes” are actually stinger cells, one of the few features this organism hasn’t evolved away.

When the parasitic blob known as Henneguya salminicola sinks its spores into the flesh of a tasty fish, it does not hold its breath. That’s because H. salminicola is the only known animal on Earth that does not breathe.

If you spent your entire life infecting the dense muscle tissues of fish and underwater worms, like H. salminicola does, you probably wouldn’t have much opportunity to turn oxygen into energy, either. However, all other multicellular animals on Earth whose DNA scientists have had a chance to sequence have some respiratory genes. According to a new study published today (Feb. 24) in the journal Proceedings of the National Academy of Sciences, H. salminicola’s genome does not.

that includes genes responsible for respiration.

While that absence is a biological first, it’s weirdly in character for the quirky parasite. Like many parasites from the myxozoa class — a group of simple, microscopic swimmers distantly related to jellyfish — H. salminicola may have once looked a lot more like its jelly ancestors but has gradually evolved to have just about none of its multicellular traits.

“They have lost their tissue, their nerve cells, their muscles, everything,” study co-author Dorothée Huchon, an evolutionary biologist at Tel Aviv University in Israel, told Live Science. “And now we find they have lost their ability to breathe.” The nucleus of each H. salminicola spore glows green under a fluorescent microscope. Through microscopy and genetic sequencing, the study authors learned that H. salminicola is the only known animal with no mitochondrial DNA.

That genetic downsizing likely poses an advantage for parasites like H. salminicola, which thrive by reproducing as quickly and as often as possible, Huchon said. Myxozoans have some of the smallest genomes in the animal kingdom, making them highly effective. While H. salminicola is relatively benign, other parasites in the family have infected and wiped out entire fishery stocks, Huchon said, making them a threat to both fish and commercial fishers.

When seen popping out of the flesh of a fish in white, oozing bubbles, H. salminicola looks like a series of unicellular blobs. (Fish infected with H. salminicola are said to have “tapioca disease.”) Only the parasite’s spores show any complexity. When seen under a microscope, these spores look like bluish sperm cells with two tails and a pair of oval, alien-like eyes.

Those “eyes” are actually stinging cells, Huchon said, which contain no venom but help the parasite latch onto a host when needed. These stinging cells are some of the only features that H. salminicola has not ditched on its journey of evolutionary downsizing.

“Animals are always thought to be multicellular organisms with lots of genes that evolve to be more and more complex,” Huchon said. “Here, we see an organism that goes completely the opposite way. They have evolved to be almost unicellular.”

So, how does H. salminicola acquire energy if it does not breathe? The researchers aren’t totally sure. According to Huchon, other similar parasites have proteins that can import ATP (basically, molecular energy) directly from their infected hosts. H. salminicola could be doing something similar, but further study of the oddball organism’s genome — what’s left of it, anyway — is required to find out.

Coronavirus: Beware of false Nostradamus prophecy – This quatrain did not...

A Never-Before-Seen Event Is Collapsing an Ice Sheet in the Russian...