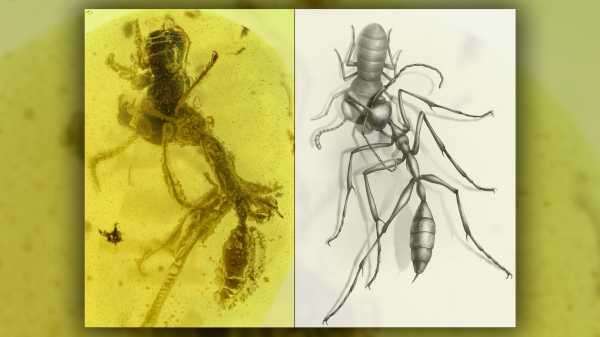 Around 99 million years ago, a juvenile cockroach met a hellish fate. It was snapped up by the jaws of a Cretaceous hell ant, a fierce predator with long, curving mandibles that swept up toward the top of the ant’s head.

Just moments later, the ant and roach were trapped in sticky sap that eventually turned to amber, providing scientists with a first glimpse of how the weird-faced ants trapped prey.

The profile of a hell ant, with exaggerated upward-facing jaws that arc like the Grim Reaper’s scythe, is unlike that of any ant alive today. Adding to the facial weirdness is a hell ant’s horn, which comes in a variety of shapes in this ant group, known as Haidomyrmecine.

Researchers had long suspected that hell ants swung their prominent mandibles upward to catch their prey, unlike modern ants that snap their jaws together horizontally. In the piece of Cretaceous amber from Myanmar, scientists found the first confirmation of this hunting technique.

Hell ants lived during the Cretaceous period (about 145.5 million to 65.5 million years ago), and are known from amber deposits in Myanmar, France and Canada spanning 100 million to 78 million years ago, said evolutionary biologist Phillip Barden, an assistant professor in the Department of Biological Sciences at the New Jersey Institute of Technology. Barden and his colleagues described the amber-embedded hell ant in a new study, published online today (Aug. 6) in the journal Current Biology.

Scientists described the first hell ant about a century ago, and have since identified 16 species — all of whom have elongated mandibles and horns.

In the amber, the mandibles of the hell ant Ceratomyrmex ellenbergeri hug the roach nymph, Caputoraptor elegans, from below, pinning it against the horn on the ant’s head. Finding this rare example of fossilized predation was astonishing — but also vindicating, Barden told Live Science. A reconstruction of the hell ant Haidomyrmex scimitarus from Burmese amber dating to approximately 99 million years ago.

«When we first started working on hell ants in 2011 to 2012, it looked like the only way they could have fed was by moving their mouth parts vertically,» Barden said. At the time, the notion was «a little contentious,» but this little hell ant showed their hypothesis was correct, he said.

The researchers also digitally modeled the heads of Ceratomyrmex and other hell ants in 3D, comparing them to both  modern and extinct ants. Their analysis of the evolutionary relationships between the groups confirmed that hell ants were among the earliest known ants, according to the study. 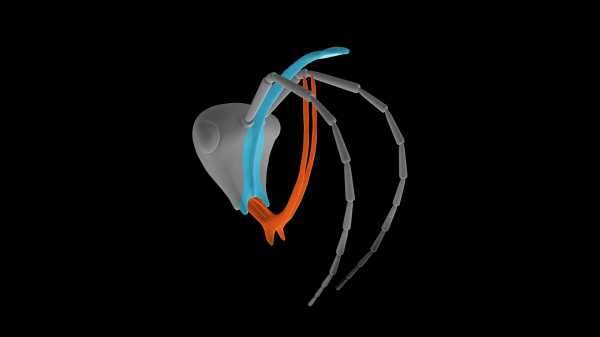 This artistic three-dimensional head reconstruction of the hell ant Ceratomyrmex was created through comparisons of CT scans of fossils and photomicrographs. Colors denote the mandibles and cranial structures involved in hell ant predation. Social digestion

The amber-trapped hell ant never got to eat the roach. However, Barden offered some diabolical possibilities for how that meal may have unfolded.

«First thing would probably be that the ant would have stung the prey to paralyze it,» he said. And how would it have eaten the roach? «We originally thought that all the hell ants would have pierced their prey and drunk the hemolymph, which is like insect blood,» Barden said. However, while some hell ant species have horns that are reinforced for piercing, Ceratomyrmex’s horn was holding the nymph in place but not piercing it.

The best potential explanation, Barden told Live Science, comes from the feeding habits of a modern ant from Madagascar called the Dracula ant (Adetomyrma venatrix), which also has oddly-shaped mandibles.

Once the larvae are fed, what happens next truly seems like a scene from hell. Adult ants pierce the larvae’s sides and they drink the hemolymph of their own offspring and siblings, a charming practice called non-destructive cannibalism, Barden said.

«Basically, they use their own siblings and offspring as a social digestive system,» he said. «We don’t have direct evidence that’s the case here, but that could be something that’s going on.»

Little ancient Egyptian mummies hold surprises inside … and they aren’t...