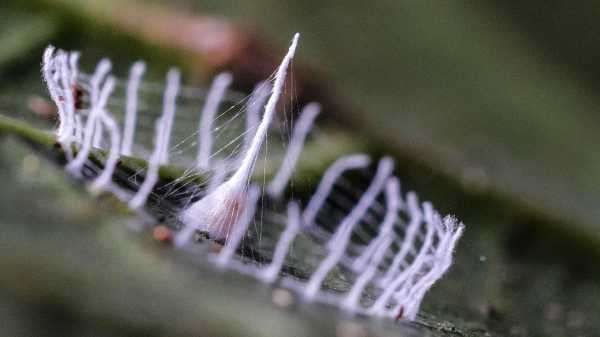 A mysterious silk structure in the Amazon known as a “silkhenge” has just been captured in a remarkable, high-resolution new video.

These strange and tiny structures, each small enough to fit on a fingertip, have captivated and perplexed scientists since the first one was discovered in 2013 in Peru, near the Tambopata Research Center. A tapering central cone ringed by delicate silk pillars reminiscent of Stonehenge led to the name.

revealed that these strange structures serve as protective fences around spider egg sacs, but the species of spider behind the structures has yet to be identified.

The gorgeous new video was shot by tropical entomologist and science communicator Phil Torres during a recent trip to Peru. Torres was one of the researchers who previously filmed the birth of the golden spiderlings, but further evidence of how and why the spiders make their delicate silkhenges has been maddeningly elusive, he told Live Science.

“It’s a thing that keeps me up at night, because it’s so annoyingly hard to find. Despite having seen it in so many places I go, the next time, it’s like it was never there at all,” Torres said. The structures are frequently found on the undersides of broad leaves, but sometimes they show up on bark. They’ve appeared in flooded habitats, so that’s a good place to look for them — except for the times when they appear in habitats that don’t flood regularly.

“We have a pretty good idea that they’re all over the Amazon basin, in places where only entomologists are looking,” Torres said.

In the new video, which Torres shared to YouTube on Jan. 14, he documented a visit in Jan. 2019 to “Silkhenge Island” in Peru, where the first silkhenge was found. But there wasn’t a single silk structure in sight. Torres had better luck in a nearby rainforest in March 2019 while leading a tour of the Peruvian Amazon for the travel website Atlas Obscura.

In video captured by a tour member, Torres gently plucked a wide leaf that held a tiny, white ring of silk pillars, holding it up to the camera.

“This hasn’t happened in three years!” he said.

High-resolution shots showed remarkable details, revealing strands of silk extending from the central cone to its base. But scientists still don’t know whether those strands are structurally important or just leftover filaments from the building process, Torres told Live Science.

The detail captured by the footage could theoretically help arachnologists identify the type of spider by revealing the kind of silk it spins, Torres explained.

These graceful stalks, which form a fence around two or three eggs, could be meant to protect spider babies from parasitic wasps that prey on that species. Indeed, Torres and his colleagues observed such predators emerging from one of the silkhenge cocoons in 2016.

“That could be a sign of what that defense is for — it could be some sort of barrier to a wasp being able to land on it. But clearly, in this case, it didn’t work,” Torres said.

For now, silkhenge discoveries are few and far between. But each find tells researchers a little more about this mysterious spider architect, Torres added.

“One key thing that we learned this time that I could say for certain is that now we’re finding them in clusters. If you find one and you spend enough time looking around that immediate area, you’re going to find more,” he said. “So, that tells us something about the behavior.”