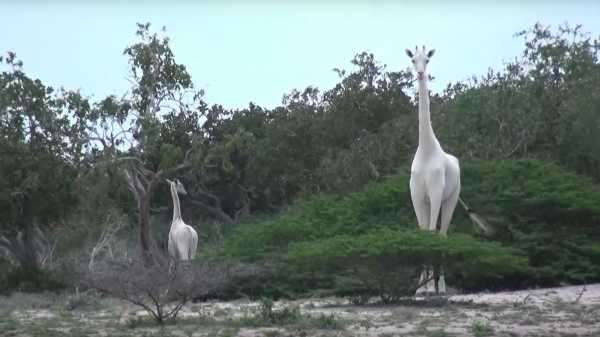 Rangers at a nature conservancy in Garissa County, Kenya, have discovered the skeletal remains of two rare white giraffes that went missing several months ago.

According to a statement issued on Twitter, the carcasses belong to a mother and her 7-month-old calf — two of only three white giraffes living in Ishaqbini Hirola Community Conservancy — and appear to have been there for  four months. All signs indicate that the animals were killed and butchered by armed poachers.

White or otherwise, all reticulated giraffes (Giraffa reticulata, the species found in the conservancy and throughout northern Kenya) are considered endangered by the International Union for Conservation of Nature. About 15,780 individuals remain in the wild, according to an estimate from the Giraffe Conservation Foundation (GCF). That represents a decline of about 56% from the roughly 36,000 estimated to remain in the wild 30 years ago. The main threats to their survival are loss of habitat (due to human activities) and poaching.