The poor baby had only just been born when it was dumped (Image: CEN)

A heartbreaking photo shows a newborn baby dumped outside a hospital in a cardboard box with its umbilical cord still attached.

Doctors believe the tiny infant was just a few hours old when he was dumped.

Shocked security guards heard the baby's distressed cries at 2am in the morning.

The baby – who has been given the name Diego Antonio by hospital staff – was left at the front door of a hospital in the municipality of San Francisco Gotera in the Morazan Department in northeastern El Salvador, Central America, local media reports.

Diego was abandoned inside a cardboard box wrapped in a couple of blankets at the entrance to the hospital. 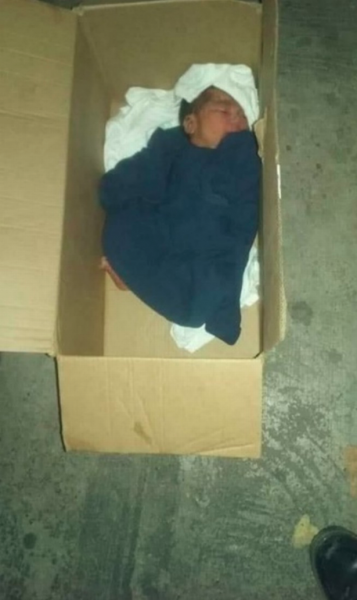 Diego Antonio will go to an orphanage

Reports said that doctors who checked him believe he had been born between four and five hours before he was found.

Thankfully, Diego is in a good condition, weighing in at between seven and eight lbs.

Hospital staff called him Diego as they needed a named to register him with at the hospital.

Diego will now be taken to an orphanage as his mum has not been found.

The El Salvador Institute for the Development of Children and Teenagers are beginning adoption procedures in the hope of finding Diego a permanent family.