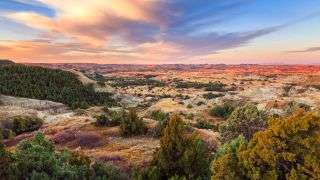 —Coronavirus in the US: Map & cases
—What are the symptoms?
—How deadly is the new coronavirus?
—How long does virus last on surfaces?
—How does it compare with seasonal flu?
—How does the coronavirus spread?

North Dakota has reported 25 deaths related to the coronavirus, and 1,225 confirmed cases of COVID-19, according to the state’s health department. As of today (May 4), 94 people in the state have been hospitalized due to the virus and 540 people have recovered. The state has recorded over 34,000 tests.

At the moment, the state has the eighth-lowest number of U.S. coronavirus cases.

The majority of cases in North Dakota are being reported in people ages 20-49, with the highest number of cases in the 30-39 age group and highest number of cases requiring hospitalization in the 60-69 age group. Seven of the people who have died because of issues related to the coronavirus were between the ages of 70 and 79; 15 were over 80 years old, one was in their 50s and one in their 60s. The youngest, and one of the more recent deaths, was a person in their 40s.

Based on the currently available data and regulations in place, scientists at the University of Washington’s Institute for Health Metrics and Evaluation predict the outbreak in North Dakota will peak in early May. The researchers estimate there will be a total of about 38 coronavirus-related deaths in the state, which is far fewer than the 350 predicted last week. That large difference isn’t unusual because these numbers change often as more data become available.

North Dakota began the process of returning to normal on Friday May 1, as Gov. Doug Burgum planned last month. Bars, gyms and restaurants were allowed to open up as long they kept capacity at 50% and maintain space between customers, Valley News Live reported. Masks are not required, but the governor recommended people wear them while out of the house. In Fargo, North Dakota, hardly anyone wore masks Friday night, although employees did, Valley News reported.

On April 9, the governor said that the state’s “targeted action, smart action is slowing the spread and flattening the curve and saving lives,” WCCO reported. In March, the governor shut down schools, bars, restaurants, gyms, movie theaters and salons, but resisted issuing a statewide stay-at-home order. Burgum encourages residents to take precautions, such as washing hands, practicing social distancing and minimizing travel.

“This isn’t as much about what government says, it’s more about what individuals do,” he said.

On March 28, the governor signed an executive order to help slow the spread of the novel coronavirus by requiring people entering the state to quarantine themselves for 14 days if they came from other countries or one of the 23 states classified as having widespread disease by the CDC, KVRR reported.

Previously, on March 19, the governor signed an executive order closing all bars, restaurants, gyms and movie theaters to on-site business until April 6. At the same time, he said North Dakota schools would stay closed indefinitely. Each district was tasked with coming up with their own education plan in the meantime. The state department has more information about school closures, including continuing school meals and how to handle special education.

Prior to that, on March 16, the governor ordered the closing of all K–12 schools in the state for the week through March 20, he said in a statement, and explained that the situation will be reassessed at that time. On May 1, the governor announced that school buildings would remain closed for the rest of the school year, local station KFYR reported.

Tufte, the state health officer, explained why the schools were closing despite only one COVID-19 case in the state at the time. “Closing K-12 education is a proactive and aggressive approach to minimize community spread,” Tufte said in the statement. “What we’ve learned this weekend from our medical advisors is that we need more time to ‘flatten the curve’ to slow the spread of COVID-19 so we don’t overwhelm the health care system.

State leadership during the pandemic

The state lab that processes tests in Bismarck ran into technical issues that created a backlog, but once repairs were made the lab was back up and running through the night to catch up, The Bismarck Tribune reported. Soon, the lab should be able to run 1,100 tests a day, Burgum said. He hopes to double that number in May and double it again in June by adding more machines and staff, according to the Tribune.

Gov. Burgum declared a state of emergency on March 13 due to the coronavirus pandemic. Then, on March 14, he brought together members of the newly formed COVID-19 Unified Command. The committee is being led by Mylynn Tufte, the state health officer, and the North Dakota National Guard adjutant general, Maj. Gen. Alan Dohrmann, The Bismarck Tribune reported.

The group brought in several other members and leaders of the community and state to help make plans to help slow the spread of the coronavirus. These stakeholders included: health care workers, business leaders, religious organizations, K-12 educators, tribal partners, among others, the Tribune reported.

Concussions Damage the ‘Bridge’ Between the Two Halves of the Brain