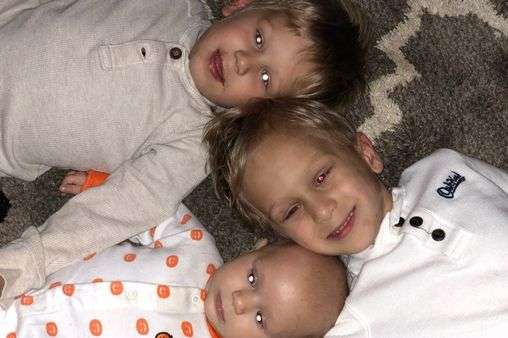 Angie and Aaron Rush have been forced to sell their home and move in with family to cover medical bills after sons Tristen, five, Caison, three, and Carter Rush, seven months all face a cancer battle

Three brothers under the age of five are all fighting the same cancer after inheriting the gene from their mum.

Tristen, five, Caison, three, and Carter, seven months, have all been diagnosed with retinoblastoma – a cancer of the eye.

The family's triple cancer fight has forced parents Angie and Aaron Rush to sell their home in order to pay the spiralling medical bills.

Mum Angie, from Atlanta, US, said she was told at a young age her own retinoblastoma gene had a high chance of being passed on to her children after she too was diagnosed at six weeks old.

Thankfully Angie recovered from her cancer as a child- but now faces monthly trips to hospital where she takes all three of her young sons for their chemotherapy sessions and eye scans.

Her eldest boy Tristan received his diagnosis in April 2014, with Caison diagnosed in October 2016 and baby Carter in January this year. 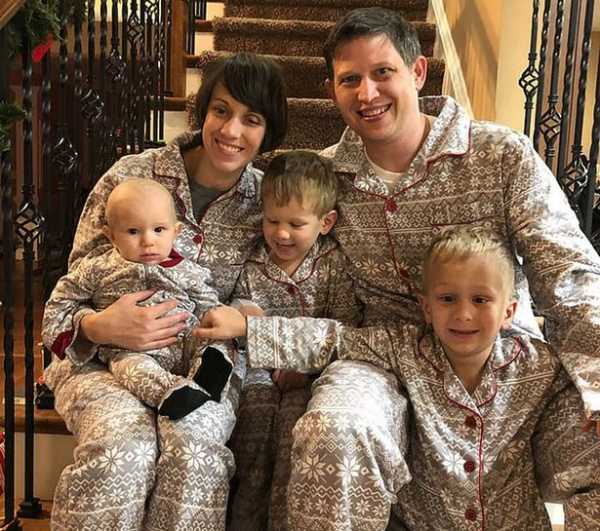 Angie and Aaron with their three sons, Tristan, Caison and Carter
(Image: Gofundme)

Angie said; "It was surprising, but we knew that the chances were 50/50.

"I had been told by doctors most of my life that because of the genetic mutation with the retinoblastoma that I have in both eyes I had a 50/50 chance of passing it on."

On a GoFundMe page setup to help with extortionate medical bills, their plight is ovbious.

It reads: "As a parent, you would do anything to provide the best health care for your children, whatever it costs!

"And it does cost almost everything you have if your child faces a medical illness or disease.  Now imagine that cost times three!  Because of the exorbitant expense to beat cancer, Aaron and Angie sold their home and moved in with family to save money to pay for the medical bills. 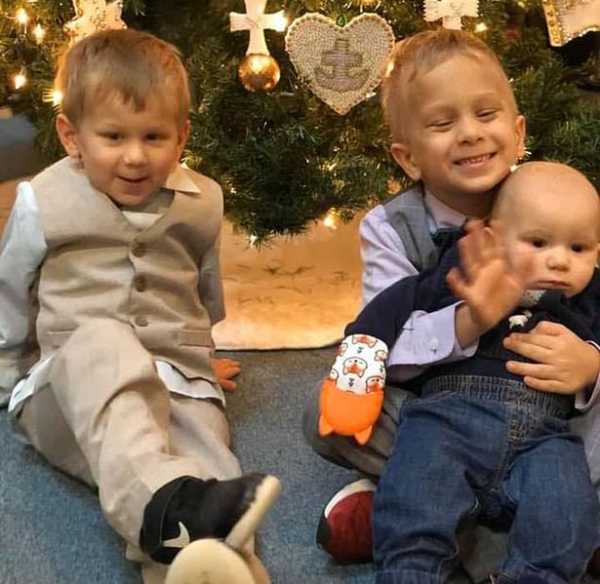 The boys inherited the cancer from their mum, who was also diagnosed at six weeks old
(Image: Gofundme) The three boys are getting chemotherapy once a month as well as laser treatments and eye checks
(Image: Gofundme)

"As you can imagine, the “unknowns” of dealing with cancer are stressful enough without the added financial stress associated with the numerous doctor visits, hospital stays, and missed time from work.

"Every day they walk by faith believing that the Great Physician knows their every need."

But despite their cancer fight, Angie told Good Morning America that her sons are full of energy and get along great.

Angie added: "They get along great but they're still brothers – they have a lot of energy.

"Tristen is so friendly and loves to sing. He loves science … we're kind of hoping he'll be a doctor someday.

"Caison is a bit shy, but has great personality and makes us laugh a lot and Carter's personality is still growing, but he smiles at everybody."

Although Angie knew there was a good chance of passing on the cancerous gene, doctors said it is rare for all three boys to be diagnosed.

Dr. Thomas Olson, director of the solid tumor program at the Aflac Cancer and Blood Disorders Center of Children’s Healthcare of Atlanta, said: "It is very rare for all three of the children to be diagnosed."

Life after death: Man believes he visited the AFTERLIFE after heart...