Home Health Will airport screenings be enough to stop coronavirus in the US? 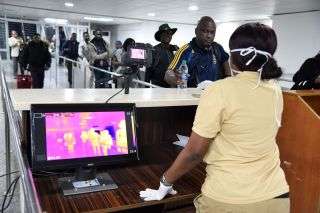 Murtala Mohammed International Airport in Lagos, Nigeria, uses thermal imaging to screen passengers for coronavirus on on Jan. 27, 2019. It’s not clear whether such screening methods will be able to stop the spread of coronavirus in the United States, but experts say it may slow down the virus a bit.

The emergence of a new coronavirus, 2019-nCoV, has triggered health screenings at airports in multiple countries, including the United States. Health experts say, however, that these screenings will likely not be the deciding factor in whether the virus continues to spread globally.

Twenty U.S. airports have instituted screenings for U.S. citizens coming from China, where the virus originated (foreign nationals who visited China in the 14 days prior to arriving in the U.S. are now being denied entry). Passengers fill out documentation of their travel and are checked for fever. Any passengers with symptoms that could match the coronavirus infection are treated at an airport Quarantine Station. These stations are staffed by medical personnel from the Centers for Disease Control and Prevention (CDC), who can determine whether an ill person should be isolated and tested for the  virus. CDC officials have the authority to order hospital admittance and home isolation for people suspected of having the virus. U.S. citizens coming from Hubei, the epicenter of the virus’ emergence, may be required to enter quarantine for up to 14 days, according to the restrictions that went into effect Sunday (Feb. 2).

These measures are probably somewhat helpful in slowing the virus, experts contacted by Live Science said, though many questions remain about how far the disease has spread already.

“I am hard-pressed to think of examples where travel restrictions have had a long-term benefit in controlling an outbreak,” said Dr. Andrew Pavia, the chief of the Division of Pediatric Infectious Diseases at the University of Utah Health. “They may slow or delay the introduction, and that may not be a bad thing if you use that time wisely to prepare.”

The novel coronavirus emerged in China’s Hubei province this winter, with most cases being reported  in the province’s capital city of Wuhan. Symptoms include fever, coughing and shortness of breath, and some cases progress to severe pneumonia, according to the CDC. Infected individuals may not exhibit symptoms for up to two weeks after contracting the virus, according to the CDC. Health officials have also noted a wide range of illness among infected people, from mild to severe. Some individuals may contract the virus without showing symptoms, according to Chinese health authorities, though one reported case of an asymptomatic person infecting others has been walked back: The woman in that case had a mild fever and had taken medications to reduce it, Live Science reported.

As of Feb. 4, health officials have confirmed 20,500 cases of 2019-nCoV worldwide, most of which are in China. Outside China, there have been 153 confirmed cases, according to Feb. 3 data from the World Health Organization (WHO). The official death toll stands at 425 inside China and two deaths outside China (one in Hong Kong and one in the Philippines). There have been 11 confirmed cases of the new coronavirus in the U.S.

The global spread of the coronavirus complicates efforts to screen for the disease, said Dr. David Cennimo, an infectious disease specialist at Rutgers New Jersey Medical School in Newark. As more cases appear in different countries, it becomes less clear that only travelers to Wuhan are potential carriers.

“It would make sense to target mainland China at this point because that’s been the number one source of cases, but I think that’s something we’re going to see change as we get more data,” Cennimo told Live Science.

Because people who are infected  may not show symptoms right away — and some people may carry the disease without ever showing symptoms — airport screening is unlikely to catch every case of the new coronavirus. One positive, Cennimo said, is that travelers who undergo the screening are also given information on what to do and who to contact should they fall ill in the days and weeks after their trip.

“That may be the real benefit of screening,” Cennimo said.

This information campaign is also useful to prime medical professionals to take the typical coughs and sneezes of winter seriously, Cennimo said. “If [a patient] said, ‘Oh I was in the airport 10 days ago and they told me to call if I got a fever,’ that would, I hope, raise everybody’s alert,” he said.

Scientists are still learning about 2019-nCoV and how it spreads, said Alan Rowan, a professor of public health at Florida State University who was involved in Florida’s State Department of Health’s response to the SARS outbreak of 2003. That outbreak was a learning experience for governments in how to handle a new disease outbreak, Rowan told Live Science, and China has moved more swiftly this time to isolate and treat patients.

But SARS and other epidemics don’t necessarily provide major insights into how to stop this new coronavirus. SARS mostly caused fairly severe illness, Pavia told Live Science, and much of the transmission occurred in medical settings. The majority of patients didn’t infect anyone, he said, but a few were “superspreaders,” passing the disease on widely. This led to a pattern of infection clusters that were relatively containable. Global travel has also increased by a factor of 10 since SARS spread, Pavia added.

In contrast, the 2009 swine flu pandemic spread around the world in weeks and was well-established long before any travel restrictions came into play. In that case, Pavia said, border closures and travel screenings took up resources that could have been better used treating the disease.

Travel screenings played a role in containing the Ebola outbreak that started in West Africa in 2014, but there was far less travel between West Africa and the United States than there is between China and the United States, Pavia said. Unlike the new coronavirus, Ebola does not spread before symptoms develop and transmission requires direct contact with bodily fluids. (Coronavirus can spread through airborne droplets sent flying by coughs and sneezes, and there’s the possibility that people may be infectious before they show symptoms. It is not known how long the coronavirus survives on surfaces.)

Ultimately, Cennimo said, the coronavirus will probably be stopped where it started — in China. Local control of infection at the source is the quickest way to end an epidemic, he said. This entails precisely what China has been doing, such as building hospitals to isolate and treat patients and closing schools and many businesses to increase “social distancing.” That simply means keeping people from interacting as much as usual.

“If you even look at U.S. flu data, for instance, social distancing is the thing that will slow down a flu surge in your local area, so everybody stays home and doesn’t infect everybody else,” Cennimo said.

In the U.S., seasonal influenza is still a greater risk than the new coronavirus, Rowan said. Fortunately, the same measures will combat the spread of both: staying home when ill, covering coughs and sneezes, avoiding touching your face and, above all, frequent hand-washing, Rowan said.

Editor’s Note: This story was updated at 2:45 p.m. E.S.T. to include more information on the current quarantine policy.