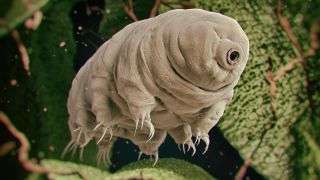 These microanimals, which live in both fresh and salt water, are famous for their ability to survive extremes that would kill other organisms. But new research finds that the creatures rapidly wilt under heat. Water temperatures of less than 100 degrees Fahrenheit (37.8 degrees Celsius) can kill tardigrades in only a day. As global temperatures rise, that could become a problem for these animals, the authors of the new study said.

“Tardigrades are definitely not the almost-indestructible organism as advertised in so many popular science websites,” said Ricardo C. Neves, a postdoctoral scientist in biology at the University of Copenhagen, who co-authored the new paper on tardigrade toughness, published Jan. 9 in the journal Scientific Reports.

The limits of tardigrades

Tardigrades are well-loved among science enthusiasts for their oddly adorable appearance. They have plump bodies and four sets of stubby legs. This cuteness has earned tardigrades the nicknames “water bears” and “moss piglets.” Most species measure less than 0.02 inches (0.5 millimeters) in length.

They’re also survivors. Tardigrades can handle being frozen, dried out, deprived of oxygen and blasted with radiation — they’ve even survived trips into the vacuum of space. The critters do this by going into what’s called a “tun” state. They draw in their limbs and contract their bodies, suspending their metabolism and essentially entering a state of suspended animation. There may even be tardigrades in this tun state on the moon right now, after a crash landing by an Israeli lunar probe likely sent some specimens scattering.

Previous research found that tardigrades could even survive being boiled at up to 303.8 F (151 C) for an hour, Neves told Live Science. But no one had studied how tardigrades handle heat for longer periods. That’s what Neves and his colleagues set out to do.

Their methods were simple. The research team exposed tardigrades of the freshwater species to temperatures of up to 104 F (40 C) in increments of 2, 24 or 48 hours. The tardigrades were in either an active or a tun state. Researchers also tested the the creatures’ survival when the temperature increase was gradual rather than immediate, exposing some of the tardigrades to acclimation periods of 2 hours at 86 F (30 C) and then 2 hours at 95 F (35 C).

The result? Too long in the heat wasn’t great for tardigrade health and happiness. After 48 hours at 104 F, all tardigrades in the active state died. At 98.6 F (37 C), about 46% of the active tardigrades died within 48 hours. Acclimation helped, though. Active tardigrades that went through the acclimation steps had a 72% survival rate at 48 hours, meaning just 28% died.

“At the end of our study, we were quite surprised to see our results, because we expected the tardigrades — both in their active state and desiccated state — to survive higher temperatures, which was clearly not the case,” Neves said. “We had found their Achilles’ heel.”

This Achilles’ heel is troubling, Neves said, because it undermines the belief that tardigrades will survive anything, even nearby supernovas or life-destroying asteroid impacts.

“The fact that the median lethal temperature for active is so close to the currently measured maximum temperature in Denmark (i.e., 36.4 degrees C [97.5 F]) — where the specimens used in this study have been sampled — is quite worrying in our opinion,” Neves wrote in an email to Live Science.

But the tardigrades’ future is still uncertain, he added. The laboratory experiments showed that the animals are capable of acclimating to temperature increases to some extent, so the rate of warming and the ability of tardigrades to adapt will probably decide their fate. Another question, Neves said, is how well marine tardigrades, not just freshwater species, will respond to hotter waters as the globe warms.