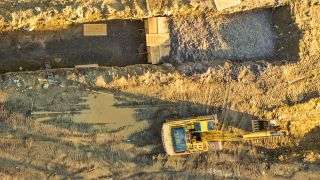 Potter’s field on Hart Island in the Bronx, New York, has experienced an influx of burials during the coronavirus pandemic. (Shown here on April 9, 2020.)

The coronavirus is not only controlling how we live, but increasingly what happens after we die.

In early April, New York City’s Council Health Committee chair Mark Levine generated buzz after tweeting that the city was considering temporary burials in local parks for victims of COVID-19. News outlets and social media users eagerly circulated his tweets, which seemed to be an ominous sign of the disease’s toll.

Although city officials assured residents that such temporary burials had not yet taken place, aerial footage of workers in protective gear interring bodies on Hart Island, the city’s “potter’s field,” seemed to confirm that the epidemic was overwhelming both our health care and our death care industries.

For people who expect a “proper” send-off when they die, the images were shocking, but for thousands of poor Americans, the prospect of burial in such a grave is a growing reality. It also is nothing new.

Burial on Hart Island has been the fate of indigent New Yorkers for years. The city purchased the island in 1868 and performed its first burial there the following year. With approximately 1,000,000 individuals interred there since, the island off the Bronx is one of the nation’s largest potter’s fields, but it certainly is not the only one.

Programs exist throughout the country to handle the indigent dead, a category that includes unidentified bodies or deceased individuals whose families cannot or will not claim their bodies. These programs vary by state and, in many cases, by county. Most allow for an extended period of time for family to claim the remains, then rely on various methods for disposing of the bodies left behind.

Chicago inters remains in plots donated by the Catholic Archdiocese at Mount Olivet cemetery. San Francisco contracts with a cemetery in nearby Oakland to dispose of cremated remains at sea.

Costs for handling these remains can range from a few hundred to a few thousand dollars per body, creating a financial burden for some cities and counties. Often, cremation is the preferred method of disposal because of its lower cost, but in some cases, counties donate the dead to medical science, which is free.

As a historian of death in America, I have seen how socioeconomic standing has dramatically shaped the final disposition of the dead throughout time, especially after the rise of the funeral industry following the Civil War. By the end of the 19th century, the more affluent could afford to be embalmed, laid out in a casket, transported to a cemetery, and put to rest in a marked plot, all which might cost around US$100 — around $3,000 in today’s dollars.

But those without means have long relied on the community to properly dispose of their remains. In rural communities, where most residents knew one another, the poor might at least hope to receive an unmarked plot in the local churchyard — the primary burial site until the establishment of public burying grounds in the 19th century.

In cities, however, the indigent dead often became the responsibility of municipal departments, such as the board of health. As better wages drew laborers to urban areas in the late 19th century, officials worked to address perceived problems stemming from industrialization and rapid population growth: poverty, vice, crime and disease. Those who died in public hospitals, poorhouses, workhouses, orphanages or prisons were usually buried by the city with little ceremony. Bodies were placed in simple coffins and carted straight to the public burial grounds with minimal funeral service.

Sadly, burial in a potter’s field also sometimes rendered the poor more vulnerable in death than they had been in life. In an era before willed body donation programs, medical schools throughout the country often targeted the poor — as well as criminals and African Americans — for the dissecting lab. Medical students or professional grave robbers disinterred remains under the cover of night, sometimes with the explicit permission of bribed public officials or cemetery employees. What’s more, the practice of grave robbing eventually became legally sanctioned through the passage of anatomy acts, whereby states like Massachusetts and Michigan permitted medical students to dissect unclaimed bodies from poorhouses.

Even without the threat of dissection, the potter’s field — named after the biblical, clay-rich burial ground the high priests of Jerusalem bought with Judas’ 30 pieces of silver — was a place of stigma. As a result, many communities did what they could to protect their own from such a fate. For example, black churches, such as Baltimore’s African Methodist Episcopal Church, founded burial grounds for the city’s enslaved and free residents. Similarly, African American benevolent societies in the 19th and 20th centuries often paid funeral and burial costs for their members.

Such practices were difficult to uphold during periods of crisis. For example, during deadly outbreaks of yellow fever and cholera in the 19th century, New York officials — fearing that the dead were contagious — hastily interred bodies in local parks. In such instances, corpses were placed in large trenches with little ceremony or intimate care. Similarly, when the flu overwhelmed Philadelphia in 1918, bodies were buried in mass graves all around the city. Such graves were also common after mass fatality events, like the 1889 Johnstown Flood, especially before DNA testing allowed for the identification of unknown remains.

Recent angst about Hart Island allows us to consider why these mass burials trouble us. They serve not only as reminders of our own mortality, but also the fragility of our death rituals in times of crisis. We all hope that our deaths will be good deaths, surrounded by loved ones, but COVID-19 kills people in isolation and limits our rituals. Yet, this is already a reality for many Americans.

Indigent burials have been on the rise for years due to both the increase in funeral costs and the widening gap between rich and poor, now further exacerbated by the pandemic’s economic effects. We will likely see an increase in the number of people for whom such burial remains a real possibility even after the pandemic resides.

Woman falls out of back of ambulance – but paramedics don’t...