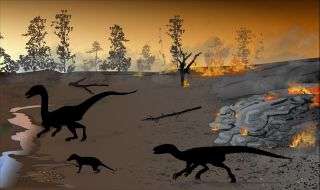 Recently discovered dinosaur and small animal footprints date back 183 million years to periods of quite in between fiery, lava eruptions.

This story begins with a dusty photo. In 2018, Emese Bordy, an associate professor of sedimentology at the University of Cape Town, discovered it by chance inside an unpublished master’s dissertation that dated back to 1964. The image, she realized, showed an ancient dinosaur footprint preserved on what became a farm in South Africa.

After tracking down the current owner of the farm, with the help of a nature photographer and historian, Bordy gathered a team to investigate the farmer’s property (with his permission) for more ancient dinosaur footprints. The farm sits in South Africa’s Karoo Basin, which is known to contain deposits of igneous rocks from lava flows that occurred in the Early Jurassic period and a good deal of preserved fossils from that time.

“We tracked on his farm for many hours in the blazing heat of the Free State, unsuccessfully,” Bordy said in an email sent to Live Science. “We were cheerlessly walking back to our field vehicle, when I suddenly found one of the tracks.”

The team then discovered a total of 25 footprints making up five trackways preserved in sandstone between basalt layers — igneous rock formed from the rapid cooling of lava. The fossil tracks were likely made 183 million years ago as the paleo-beasts stomped along an ancient stream with moist, sandy banks. “The properties of the sandstone allow us to tell that the tracks were deposited in seasonal streams that run during flash flood events,” Bordy said.

By measuring the size of the footprints and the length of the space between the prints, then comparing them with relevant numbers in the science literature, Bordy and her team found that some of the footprints belonged to large carnivorous dinosaurs that walked on two feet, such as species in the genus.

Others belonged to small, likely herbivorous dinosaurs that walked on four feet. They also found some more “vague” pathways likely made by synapsids, or a group of reptiles that are thought to be the ancestors of mammals, Bordy said.

They discovered that the herbivore that left behind its footprints was likely a new ichnospecies — a species discovered from trace fossils such as footprints rather than remains from the animal itself. They named the new ichnospecies , after Paul Ellenberger, a French priest and trace fossil expert who is considered to be “the father of vertebrate ichnology in southern Africa,” she said.

The footprints date back 183 million years, to a time period known as the “dawn of the dinosaurs” but which was otherwise rough for life on Earth. An early Jurassic extinction, otherwise known as the end-triassic extinction wiped out 76 percent of marine and terrestrial species, allowing dinosaurs to become the dominant animals on land, according to Britannica.

“This mass extinction event was caused mostly, but probably not only, by the volcanic degassing of the ancient lava flows that poured onto the land surface here in South Africa,” Bordy said. “The enormous amount of molten lava, as it was flowing across the landscape, not only turned this environment into a land of fire, but also changed the chemistry of the atmosphere and oceans in the early Jurassic.”

Analysis of the ancient lava flows, rocks and plant fossils found within them allowed Bordy and her team to reconstruct what the landscape looked like 183 million years ago.

In between fiery lava eruptions, there were intermittent, quieter periods when the environment and the life within it recovered. “For short time periods, the streams were flowing again, the sun was shining, the plants were growing and the animals, among them dinosaurs, were grazing and hunting,” Bordy said. “This is attested by the vertebrate footprints of both meat- and plant-eating dinosaurs, plant remains, sediment deposits of streams and lakes, to name just a few.”

It’s not clear how long those quieter periods lasted. “We do not have sensitive enough geochronological tools to measure the time between the lava flow and sand deposition,” she said. “But sandstone with the tracks clearly shows that the time between lava flow events was at least — time to time — long enough for life to return to the site where the tracks are found, long enough for streams to deposit sediments [and] for animals to walk again.”

Because the creatures lived in between times of raging volcanic action, Bordy refers to them as “figurative firewalkers.” Now, she hopes to find more fossil tracks in the area to get a more complete picture of what happened there so long ago. “Not only for lessons on the deep past, but for lessons for our future,” she said.

The findings were published Wednesday (Jan. 29) in the journal PLOS ONE.