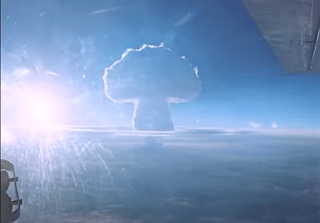 The Tsar Bomba explodes over the Russian Arctic

In October 1961, the Soviet Union dropped the most powerful nuclear bomb in history over a remote island north of the Arctic Circle.

Though the bomb detonated nearly 2.5 miles (4 kilometers) above ground, the resulting shockwave stripped the island as bare and flat as a skating rink. Onlookers saw the flash more than 600 miles (965 km) away, and felt its incredible heat within 160 miles (250 km) of Ground Zero. The bomb’s gargantuan mushroom cloud climbed to just below the edge of space.

This was RDS-220 — also known as the Tsar Bomba. Nearly 60 years after the bomb’s record-shattering detonation, no single explosive device has come close to matching its destructive power. Last week, Rosatom State Atomic Energy Corporation (Russia’s state atomic agency) released 40 minutes of previously classified footage, showing the bomb’s journey from manufactor to mushroom cloud. Now, you can watch it all on YouTube. (The countdown to detonation begins at 22:20).

Soviet Premier Nikita Khrushchev personally commissioned the construction of the Tsar Bomba in July 1961, Popular Mechanics reported. While Krushchev wanted a 100-megaton nuclear weapon, engineers ultimately presented him with a 50-megaton version — equivalent to 50 million tons (45 million metric tons) of TNT detonated at once. Even with half of the premier’s requested payload, the bomb was unfathomably powerful. The bomb was thousands of times stronger than the nukes detonated by the United States over Hiroshima and Nagasaki during World War II, and dwarfed the detonation of Castle Bravo — the most powerful nuclear weapon ever tested by the United States — which yielded just 15 megatons (13 million metric tons).

As the new footage shows, the Tsar Bomba was enormous, weighing 27 tons (24 metric tons) and measuring about as long as a double-decker bus. An aerial bomber carried the massive weapon high over the Novaya Zemlya islands in the Russian Arctic, then dropped it via parachute before clearing the area. The explosion was so powerful that it actually knocked the aircraft out of the sky, causing the plane to plummet 3,000 feet (900 m) before the pilot could right it, according to Popular Mechanics.

—Apocalypse now: The gear you need to survive doomsday

Thankfully, no human casualties have been attributed to the Tsar Bomba detonation, and no bomb matching its power was ever tested again. In 1963, the United States, the Union of Soviet Socialist Republics (USSR) and the United Kingdom signed the Limited Nuclear Test Ban Treaty, which prohibited airborne nuclear weapons tests.

Since then, atomic tests have carried on underground as nations continue to stockpile nuclear weapons, occasionally changing the geography of the Earth around them. One 2018 nuclear test conducted in North Korea caused an entire mountain to collapse over the test facility — a reminder, perhaps, that the world hardly needs another Tsar Bomba in order to wreak devastating nuclear damage.