Home History Stone Age man, whose skull was found on a spike, gets facial... 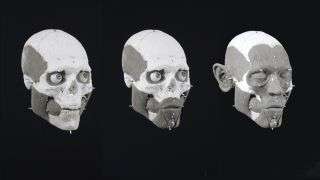 This recreation shows the likeness of a man from a hunter-gatherer group who lived about 8,000 years ago in what is now Sweden.

Archaeologists were stunned when, about a decade ago, they uncovered an underwater Stone Age burial dating to about 8,000 years ago in Sweden. This burial contained the battered skulls of 11 adults and one infant, but only two of those individuals — one adult and the infant — had jaws. Two of the jawless skulls had been placed on stakes that, during the Stone Age, had stuck out of the lake.

Curiously, there were plenty of other jawbones in the burial, but they belonged to animals, including those of brown bears, wild boars, red deer, moose and roe deer.

It’s unclear why the Middle Stone Age, or Mesolithic, individuals were buried this way. But now, we know what one of these individuals may have looked like. Oscar Nilsson, a forensic artist based in Sweden, recreated the bust of one of the jawless skulls found on a spike in the lake. The following photos show exactly how he crafted the recreation.

To get a replica of the Mesolithic man’s skull, Nilsson put it in a CT scanner. This gave Nilsson a virtual 3D image of the skull.

Nilsson then used data from the CT scan to print a plastic replica of the Stone Age skull with a 3D printer.

Because the man was missing his jaw, Nilsson made one for him based on measurements from the skull.

Eyes and ears and mouth and nose

Nilsson used forensic methods to recreate the man’s muscles and other facial features.

A prior DNA analysis revealed that this man likely had dark brown hair and blue eyes when he was alive about 8,000 years ago.

Seven of the 11 adult skulls found in the burial showed signs of blunt-force trauma. This man, in particular, had a 1-inch-long (2.5 centimeters) wound on top of his head.

This injury had healed slightly before the man died, so Nilsson gave the reconstruction scar tissue over the wound. Then, Nilsson styled a short hair cut so that viewers could see the scar on top of the man’s head.

Nilsson painted white chalk on the man’s chest. This was inspired by similar practices seen in Indigenous groups today.

The wild boars’ jaws found in the grave inspired Nilsson to dress this man in wild boar skin and give him a pigtail.

From start to finish

The bust is now on display at Charlottenborg manor house in Motala, Sweden.

Life after death: Woman claims to meet Jesus ‘I was one...