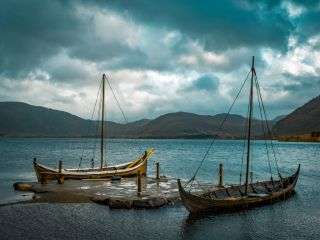 When archaeologists excavated an unusual Viking grave site in Norway, they dug up two bodies … along with the remnants of two massive boats.

After hundreds of years underground, only remnants of the wooden vessels remained, but the excavation team could tell the two boats had been stacked atop each other. Viking burial sites often feature boats, with some even boasting two buried near each other; but boats buried inside each other are “essentially an unknown phenomenon,” Raymond Sauvage, an archaeologist at the Norwegian University of Science and Technology University Museum, said in a statement.

The boats’ occupants only added to the mystery of the burial site.

The top boat, a vessel about 24 feet (7 to 8 meters) long, contained the remains of a woman surrounded by a collection of ornaments, including a pearl necklace, two pairs of scissors, part of a spindle and an entire cow head. The woman’s remains were adorned with two shining brooches, one shell-shaped and one in the shape of a crucifix.

The crucifix “decoration and the design itself tell us that it came from Ireland, and that it was once part of a harness fitting,” Aina Heen Pettersen, a researcher in the NTNU Department of Historical Studies, said in the statement. Vikings who took part in voyages and raids often collected harness fittings as jewelry, Petterson added. Based on the goods recovered from the woman’s grave, the archaeologists determined that she had died during the second half of the ninth century.

But remarkably, the man whose body had been buried in the boat below died in the century prior, they discovered. The man’s boat measured about 30 feet (9 to 10 m) long and contained a shield, a spear and a single-edged sword. “Sword styles change through the centuries, which means we can unambiguously date this grave to the eighth century, the period that is known as the Merovingian era in Northern Europe,” Sauvage said.

“That’s assuming that we are not dealing with a Viking hipster,” he added. Sauvage and his team concluded that, upon the woman’s death, Vikings had carefully excavated the man’s boat, placed the smaller boat inside, and reburied both vessels together.

The only question is, why?

“It’s reasonable to think that the two were buried together to mark the family’s ownership to the farm, in a society that for the most part didn’t write things down,” Sauvage said. The team uncovered the double-boat grave on farmland now known as Skeiet in central Norway. In the Middle Ages, law required that a landowner’s family prove that the members had held the land for at least five generations, Sauvage said. Therefore, the Vikings who conducted the double-boat burial likely knew precisely where each deceased family member lay on the property, he added.

What’s more, the double-boat grave lay at the edge of a large mound that may have once held additional grave sites. Long years of farming have decimated most of the mound, but the archaeologists suspect they may find many more buried artifacts scattered over the property.

“So far, we’ve found part of a brooch from the Merovingian era, indicating that the large burial mound once held a richly appointed woman’s grave,” Sauvage said. “This is a fascinating era in Scandinavian history, from which there are few archaeological finds,” he added.

Nicoletta Lanese is a science journalist and dancer who aims to bring science to new audiences, whether in print or on stage. She holds degrees in neuroscience and dance from the University of Florida and a graduate certificate in science communication from the University of California, Santa Cruz. Brains are her beat. Follow her on Twitter @NicolettaML.