Home History What Was the Black Death? 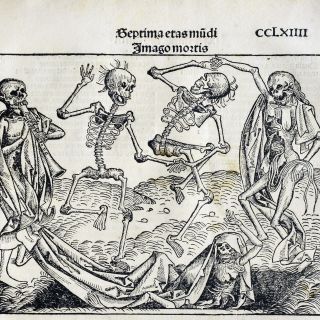 The Black Death was responsible for killing thousands of people in medieval Europe. This illustration from the time shows skeletons rising from the dead for the dance of death. From the “Nuremberg Chronicle” (published in 1493) written by Hartmann Schedel and illustrated by Michael Wolgemut.

The Black Death of the 14th century is well known. When historians discuss “the plague” they are usually referring to this epidemic of bubonic plague caused by the bacterium . In his book, “The Black Death, 1346-1353: The Complete History”(Boydell Press, 2018), Ole Jørgen Benedictow estimates that 50-60% of the population of Europe died during the Black Death, an even higher proportion than the often-cited “one-third” of Europeans lost to the disease.

Less well known is that the plague continued to strike Europe, the Middle East and beyond for the next four centuries, returning every 10 to 20 years.

The name “Black Death,” Benedictow suggests, is actually a “misunderstanding, a mistranslation of the Latin expression ‘atra mors,'” meaning at the same time “terrible” and “black.” There is no discernible correlation between the grisly name and the symptoms experienced by victims.

When did the Black Death start?

The Black Death swept through the Middle East and Europe in the years 1346-1353 but it may have begun several decades earlier in the Qinghai Plateau of Central Asia.

The period of recurring plague epidemics between the 14th and 18th centuries is known as the Second Plague Pandemic. The so-called First Pandemic occurred in the sixth through eighth centuries A.D. and the Third Pandemic lasted roughly between 1860-1960.

How did the Black Death affect Europe?

As surprising as it may seem to modern audiences, medieval and Early Modern people grew accustomed to the plague, and took this periodic loss of population in  stride. Doctors and scientists worked to understand and treat plague better, especially in terms of preventing its arrival and spread in their communities.

Many important developments in the history of medicine and health occurred against this backdrop of plague: the rebirth of dissection, the discovery of the circulation of blood and the development of public health measures. It is unclear why the Second Pandemic ended in Western Europe, while it continued to strike in Russia and the Ottoman Empire well into the 19th century.

When did the Black Death end?

The Great Plague of London in 1665 was the last major outbreak in England and plague also seems to have disappeared from Spanish and Germanic lands after the 17th century. The plague of Marseilles, France, in 1720-1721 is considered to be the last major plague outbreak in Western Europe.

Some historians argue that public health had improved to such an extent as to halt the spread of plague, especially through the systematic and effective use of sanitary legislation. Others point to evolutionary changes in humans, rodents or in the bacterium itself, but none of these claims seem to be holding up to recent discoveries in plague genetics.

What is clear, is that in the four centuries between the Black Death and the disappearance of plague from Europe, doctors worked tirelessly to explain, contain and treat this terrifying disease.