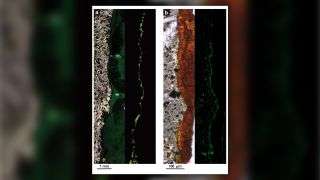 Aerobic bacteria (green) live densely packed into tunnels of clay minerals found in this sample of solid rock, collected from 400 feet (122 meters) beneath the seafloor. Image B is 1,000 times greater magnification than Image A.

Deep under the South Pacific seafloor in rocks that are more than 100 million years old, scientists were surprised to find dense colonies of bacteria thriving on crumbs of organic matter.

An estimated 10 billion single-celled organisms occupied just 0.6 cubic inches (1 cubic centimeter) of space in these volcanic rocks; that’s about the same bacterial density as that in the human gut, the scientists wrote in a new study.

Because the rock samples were collected far from hydrothermal vents, the bacteria probably weren’t randomly carried into the crevices by currents. Rather, they likely colonized the cracks and then multiplied over millions of years, feeding on organic material in the clay that also filled the cracks, the study authors reported.

Experts have long suspected that microbes could be found in sub-seafloor rocks, but evidence has remained elusive, said lead study author Yohey Suzuki, an associate professor with the Department of Earth and Planetary Science at the University of Tokyo.

For the new study, Suzuki and his colleagues devised a new method that targeted the tiny cracks in rocks to hunt for single-cell life. Rather than pulverizing their rock samples, as is typically done when searching for signs of life in rocks, the team coated the samples with a special epoxy and then cut very thin slices. This technique is commonly used by pathologists to study thin slices of body tissues; in rocks, the epoxy preserved the shapes of the tiny cracks inside the slices, Suzuki said in a statement.

Then, the scientists stained the slices with fluorescent dye to highlight microbial DNA.

This is an example of one of the thin slices of rock that scientists prepared using special epoxy, to ensure the rock held its shape while it was cut.

Under a microscope, bacteria in the cracks lit up as glowing green spheres, visible in long, twisting tunnels inside the rocks; chemical analysis confirmed that the “greenish signals” came from microbial DNA and not from fluorescent structures in the minerals. Surrounding the bacteria was fine-grained clay rich in organic carbon, providing vital nutrients for the colonies, according to the study.

Further genetic analysis revealed that there were different bacteria species colonizing rocks that were different ages, perhaps because variations in heat and water flow over millions of years shaped the accumulation of different minerals that fed the bacteria, the researchers reported.

Finding densely packed and thriving microbial communities in this unlikely environment also offers hope for locating microbes that could survive in similar rocky homes on other worlds, such as Mars, Suzuki said in the statement.

“This discovery of life where no one expected it in solid rock below the seafloor may be changing the game for the search for life in space,” Suzuki said.

The findings were published online April 2 in the journal Communications Biology.