Home Planet Earth End of the world: Are eerie trumpet sounds from the sky a... 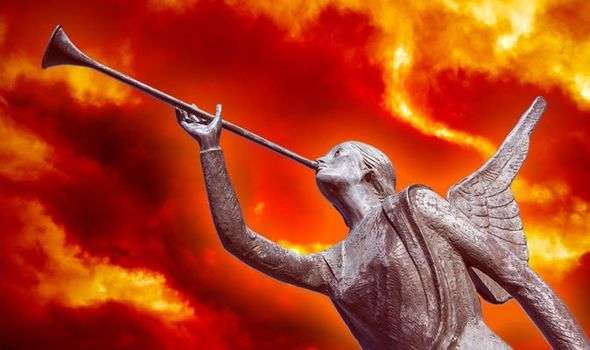 END OF THE WORLD fears are being stoked ahead of the June 21 solar eclipse and people are reporting eerie, trumpet-like sounds from the skies.

A viral video clip shared to Twitter reveals a “permanent creepy” sound in the skies over San Francisco, US. The bizarre phenomenon is reminiscent of blaring trumpets – a sign some believe will precede the Christian apocalypse. Many more San Francisco residents have since confirmed hearing the sound, adding more fuel to the mystery.

One person reported the sound in Land’s End, saying: “I had been hearing it for weeks and felt like I was losing my mind.”

Another Twitter user said: “This is the part were aliens invade right!?”

A second person said: “First time I heard it I went into panic mode, like wtf now.”

A third person tweeted: “It is definitely creepy, and don’t let it be foggy, otherwise, super creepy, but, great for creepy filmmaking.” 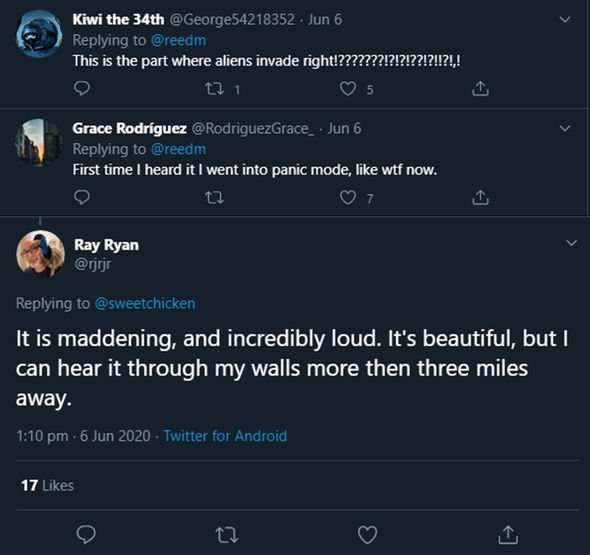 Another person said: “Can someone explain me why is this eerie sound has been going on for an hour in #SanFrancisco”

Similar phenomena have been recorded in the UK, with reports as far as Germany, Australia and Ukraine.

According to the Bible’s Book of Revelations, seven trumpets will be sounded in the last days to unleash a series of catastrophic events.

The Book of Revelation holds the final chapters of the Bible and details the end of the world and Second Coming of Jesus Christ.

Hope Bolinger wrote in an article for Christianity.com: “The seven seals and seven trumpets are a series of catastrophic events that will take place during the End Days to enact the judgment of God upon the earth.”

Fears of the world coming to an imminent end are now at an all-time high, following many bizarre claims and conspiracy theories the world will end on June 21.

Social media platforms have been flooded in recent days with claims a solar eclipse this weekend is a harbinger of doom.

Some conspiracy theorists have also claimed a new interpretation of the Maya calendar proves June 21 will be the real deal.

However, the trumpet-like noise heard across San Francisco’s Bay Area has been attributed to the Golden Gate bridge and not biblical prophecy. 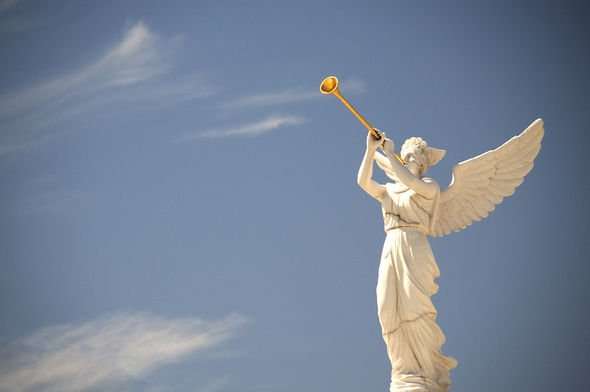 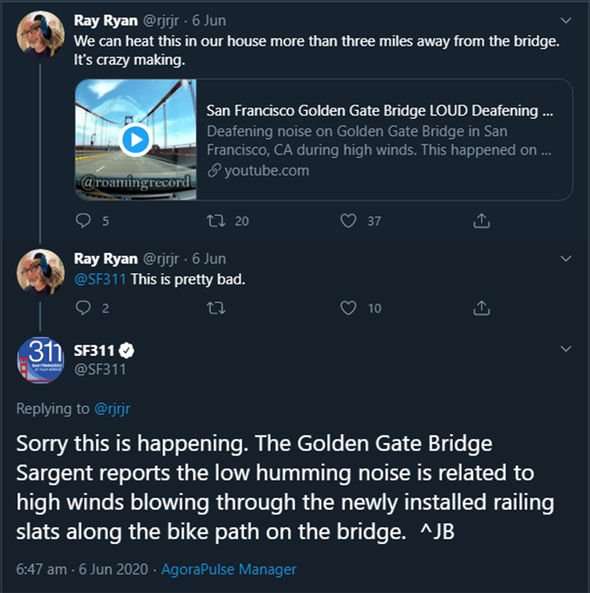 According to the Golden Gate Bridge Sargent, the mysterious hum is being produced by high winds blowing through recently installed railing slats along the bridge’s bike path.

The Twitter user who shared the original video tweeted: “TIL: The Golden Gate Bridge has just become the world’s largest wind instrument.

“No, but seriously: There is now a permanent creepy three-tone dissonant soundtrack flooding San Francisco thanks to some recently completed bridge construction.”

In a follow-up tweet, the person said: “Admittedly, this absolutely feels like a soundtrack worthy of 2020 (do I seen an Oscar in our bridge’s future…?)”

So no, the noise is not a biblical harbinger of doom and scientists do not expect the world to end any time soon.

And in regards to the recent claims about June 21, 2020, experts have branded the conspiracies a hoax.

Nick Pope, a former UFO investigator for the British Ministry of Defence said in a tweet: “Things may feel apocalyptic right now, but don’t panic, the world isn’t going to end on June 21, as some Mayan calendar theorists suggest.

“This unscientific nonsense is just as bogus as all the other previous (and wrong!) end of the world predictions.”