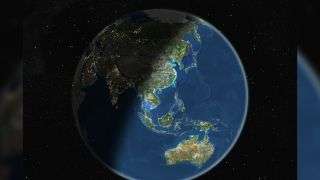 The tectonic plate between India and Australia, beneath the Indian Ocean, is very slowly breaking in two.

The giant tectonic plate under the Indian Ocean is going through a rocky breakup … with itself.

In a short time (geologically speaking) this plate will split in two, a new study finds.

To humans, however, this breakup will take an eternity. The plate, known as the India-Australia-Capricorn tectonic plate, is splitting at a snail’s pace — about 0.06 inches (1.7 millimeters) a year. Put another way, in 1 million years, the plate’s two pieces will be about 1 mile (1.7 kilometers) farther apart than they are now.

“It’s not a structure that is moving fast, but it’s still significant compared to other planet boundaries,” said study co-researcher Aurélie Coudurier-Curveur, a senior research fellow of marine geosciences at the Institute of Earth Physics of Paris.

For instance, the Dead Sea Fault in the Middle East is moving at about double that rate, or 0.2 inches (0.4 centimeters) a year, while the San Andreas Fault in California is moving about 10 times faster, at about 0.7 inches (1.8 cm) a year.

The plate is splitting so slowly and it’s so far underwater, researchers almost missed what they’re calling the “nascent plate boundary.” But two enormous clues — that is, two strong earthquakes originating in a strange spot in the Indian Ocean — suggested that Earth-changing forces were afoot.

On April 11, 2012, a magnitude-8.6 and magnitude-8.2 earthquake hit beneath the Indian Ocean, near Indonesia. The earthquakes didn’t happen along a subduction zone, where one tectonic plate slides under another. Instead, these quakes originated in a weird place for earthquakes to happen — in the middle of the plate.

These earthquakes, as well as other geologic clues, indicated that some kind of deformation was taking place far underground, in an area known as the Wharton Basin. This deformation wasn’t wholly unexpected; the India-Australia-Capricorn plate is not one cohesive unit.

“It’s like a puzzle,” Coudurier-Curveur told Live Science. “It’s not one uniform plate. There are three plates that are, more or less, tied together and are moving in the same direction together,” she said.

The team looked at a particular fracture zone in the Wharton Basin where the earthquakes had originated. Two datasets on this area, collected by other scientists on research vessels in 2015 and 2016, revealed the fracture zone’s topography. By recording how long it took sound waves to bounce back from the sediment-lined seafloor and bedrock, the vessel’s scientists were able to map the basin’s geography. (Study co-author Satish Singh, a visiting professor of seismology at the Earth Observatory of Singapore, led the expedition for the 2015 dataset.)

When Coudurier-Curveur and her colleagues looked at the two datasets, they found evidence for pull-aparts, which are depressions that form at strike-slip faults. The most famous strike-slip fault is probably the San Andreas Fault. These types of faults cause earthquakes when two blocks of Earth slide past each other horizontally. A good way to visualize this is to put your fists together and then move one forward and the other backward.

Remarkably, the team found 62 of these pull-apart basins along the mapped fracture zone, which spanned nearly 217 miles (350 km) long, although it’s likely longer, Coudurier-Curveur said. Some of these basins were huge — up to 1.8 miles (3 km) wide and 5 miles (8 km) long.

“It might mean that this strike-slip fault is more localized at its southern boundary,” at least for now, Coudurier-Curveur said. The term “localized” means that the shaking is taking place at one main fault, versus “distributed,” which is when shaking happens at several minor faults, she said.

These basins, which started forming about 2.3 million years ago, followed a line that passed close to the epicenters of the 2012 earthquakes.

“It doesn’t seem like it’s yet a fully formed plate boundary,” William Hawley, a seismologist at the Lamont-Doherty Earth Observatory at Columbia University in New York, who wasn’t involved in the study, told Live Science. “But the take-home message is that it’s becoming one, and it probably accounts for much of the deformation that we know is occurring there.”

This map shows the seafloor topography and deformation below it at a fracture in the Wharton Basin. This fracture likely formed when the ocean crust was formed, but now this fracture is being turned into a new plate boundary. The
purple-colored depressions are indicative of a strike-slip fault, which is the same kind of fault as the San Andreas Fault in California.

Why is the fault there?

Coudurier-Curveur noted that the fracture zone, a weakness in the oceanic crust, didn’t form because of earthquakes. Rather, these so-called passive cracks formed, in part, when new oceanic crust emerged from the mid-ocean ridge (the boundary between plates where magma comes out) and cracked due to the Earth’s curvature.

Because different parts of the India-Australia-Capricorn are moving at different speeds, this fracture zone, once just a passive crack, is becoming the new boundary for the plate’s split into two pieces, she said.

However, because the India-Australia-Capricorn split is happening so slowly, another strong earthquake along this particular fault likely won’t occur for another 20,000 years, the researchers said. What’s more, it will take tens of millions of years before the split is complete, Coudurier-Curveur said.

“It has long been postulated that these [fracture] zones of weakness could be the birthplace along which new plate boundaries, such as subduction zones or strike-slip boundaries, form,” said Oliver Jagoutz, an associate professor of geology at the Massachusetts Institute of Technology, who was not involved with the study.

If anything, the study reminds us that plate tectonics are constantly moving.

“Plates are constantly formed and destroyed on Earth,” Jagoutz told Live Science in an email. “It is detailed studies like these that will allow us to better understand how the jigsaw puzzle of plates that constitute the outermost solid layer of Earth formed and evolved.”

The study was published online March 11 in the journal Geophysical Research Letters.

First baby in world born from eggs grown in lab and...