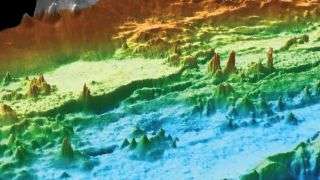 In the dark ocean depths off the coast of the Pacific Northwest, a magical fairyland of towering spires and hydrothermal chimneys sprout from the seafloor, a stunning new underwater map reveals.

The field of hydrothermal chimneys stretches along the ocean bottom on the Juan de Fuca Ridge to the northwest of coastal Washington state, in an area known as the Endeavor Segment.

Research on the Endeavor vents began in the 1980s, and scientists had previously identified 47 chimneys in five major vent fields. But recent expeditions, using an autonomous underwater vehicle operated by the Monterey Bay Aquarium Research Institute (MBARI) revealed more than 500 chimneys in a zone about 9 miles (14 kilometers) long and 1 mile (2 km) wide.

Deep-sea chimneys form around hydrothermal vents from a buildup of minerals that flow to the surface in heated liquid — as hot as 750 degrees Fahrenheit (400 degrees Celsius). As hot liquid meets cold seawater, minerals precipitate and settle around the vent, collecting to form towers that can reach impressive heights.

At the Endeavor Segment, “abundant and vigorous” hydrothermal activity has transformed the seafloor for approximately 2,300 years, and periods of intense seismic vibration shake things up even more, according to a new study on the MBARI expedition. Chimneys that climb from Endeavor are among the tallest in any mid-ocean ridge; the biggest ever documented, a top-heavy tower known affectionately as “Godzilla,” extended 150 feet (45 meters) from the seafloor, but it crumbled in 1995.

Most of the five Endeavor vent fields have whimsical names. While the field serving as the main research destination is simply called “Main Endeavor Field,” the other fields are known as: “High Rise” (for its resemblance to a cityscape crammed with skyscrapers); “Sasquatch;” “Mothra;” and “Salty Dawg.” Other vent sites are named “Quebec,” “Dune” and “Clam Bed,” according to the study.

“Black smokers,” such as this one in the Endeavour vent field, belch superheated fluids at over 570 degrees Fahrenheit (300 degrees Centigrade) into the surrounding seawater. High-res surveys

Prior expeditions struggled to identify seafloor structures in the depth and darkness of the vent fields; sonar from surface vessels and explorations by diving robots couldn’t map the region at high enough resolution for researchers to count individual chimneys.

“It’s very hard to see down there because all the particulates in the water create a kind of haze,” said MBARI senior scientist, geologist and volcanologist David Clague, who is lead author of a new study on the Endeavour Segment.

“There was one well-studied chimney where the composition of the fluids seemed to vary from one research dive to the next. It wasn’t until we did our detailed mapping that people realized they had actually been sampling at two different chimneys,” Clague said in a statement.

“They apparently would encounter one chimney or the other depending on what direction they approached the site,” he said.

This time, MBARI scientists took a closer look at the chimneys with the D. Allan B, a yellow torpedo-shaped AUV measuring about 17 feet (5 m) long and capable of mapping with multibeam sonar at a resolution of 4 feet (1 m), according to the study.

The study authors counted 572 chimneys that were taller than 10 feet (3 m) high — tall enough to be distinguished from other landscape features. Most of the chimneys were under 26 feet (8 m) tall, though the tallest extended to heights of 90 feet (27 m) above the sea bottom.

Most of those chimneys were quiet. If mineral buildup blocks the chimney vent, superheated fluids divert to another crack and the chimney ceases to grow, though they can remain standing for centuries. Only 47 of the Endeavor chimneys (those that were identified in previous maps) were active, the researchers reported. By comparison, a similar hydrothermal field, Alarcón Rise in the Gulf of California, has only 109 chimneys mapped, but 31 of them are active.

Endeavor likely has more inert structures than Alarcón Rise because the latter lies in a more volcanically active region, and its older, inactive chimneys have been buried over time by lava flows, so you can’t see them, the researchers reported. However, that may soon change.

Geologic evidence from Endeavor and other vent fields suggests that hydrothermal activity is part of a cycle that reshapes the seafloor over many thousands of years. Endeavor’s hydrothermal period may be winding down, to be replaced by a lava-spitting “magmatic phase” that can last tens of thousands of years, according to the study. When that happens, many of the newly mapped Endeavor structures may vanish — as did the older chimneys at Alarcón Rise, the researchers wrote.

The findings were published online April 14 in the journal Geochemistry, Geophysics, Geosystems.