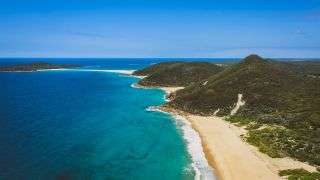 Port Stephens in Australia was one of the places where the robotic gliders found an underwater river.

Massive, underwater rivers have been discovered hidden off Australia’s coasts by robotic ocean gliders. These rivers could be critical for moving material from the coasts to the deep ocean, the researchers said.

Called «dense shelf water cascades,» the hidden rivers form when shallow water on the coasts loses heat during the colder months. This water is already highly salty due to evaporation during the summer months. This cold, salty stream of water in the inner portion of the continental shelf — the edge of the continent that’s typically submerged in shallow water — is denser than deeper water.

Driven by the difference in density, this river of water flows offshore along the ocean floor, according to a statement from The University of Western Australia. Previous studies have documented this phenomenon, but those were limited in their scope and didn’t look at how these rivers are affected by seasons, according to the study.

Now, a group of researchers at The University of Western Australia analyzed data collected between 2008 and 2019 with ocean gliders from eight locations on Australia’s coastline. The data «is the equivalent to spending more than 2,500 days at sea,» lead author Tanziha Mahjabin, who completed the project as part of her Ph.D. thesis, said in the statement.

As part of Australia’s Integrated Marine Observing System, autonomous underwater vehicles deployed along the coasts collected data on the temperature and salinity (salt concentration) of the water. These measurements allowed researchers to deduce the water’s density, revealing the presence of these underwater rivers.

The researchers found that the underwater rivers are a regular occurrence during the fall and winter months in Australia across a span of 6,213 miles (10,000 kilometers). In the new study, the researchers also found that the underwater rivers could withstand high winds and high tides that often stir up the water, a finding that’s a «unique occurrence globally,» the authors wrote in the study.

The underwater gliders were also equipped with sensors to detect organic matter and chlorophyll, a green pigment found in plants, algae and cyanobacteria. The underwater rivers in Australia, they found, serve as transport channels for material and matter across the continental shelf and deeper into the ocean. «The coastal ocean is the receiving basin for suspended and dissolved matter that includes nutrients, plant and animal matter and pollutants. and represents an important component of the ocean environment, connecting the land to the deeper ocean,» senior author Yasha Hetzel, a researcher at The University of Western Australia’s Oceans Graduate School, said in the statement.

The findings were published yesterday (June 16) in the journal Scientific Reports.