Home Planet Earth Nostradamus 2020: What did Nostradamus say about 2020 – Did he predict... NOSTRADAMUS is said to have predicted many historical events – but what did he have to say about 2020 and did Nostradamus predict the coronavirus?

Nostradamus is the 16th-century apothecary and writer, who many believe could accurately predict the future. The French mystic is often credited with predicting the outbreak of World War 2 as well as the assassination of John F Kennedy in 1963. Nostradamus’ followers base their bizarre claims on his 1555 book Les Propheties.

The tome is a collection of cryptic passages, known as quatrains, that rarely mention specific details, locations or people.

Conspiracy theorists are, however, certain the poetic quatrains can be deciphered to revealed clues about the future.

So what did Nostradamus have to about the year 2020?

And did the supposed seer have anything to say about the ongoing coronavirus pandemic? 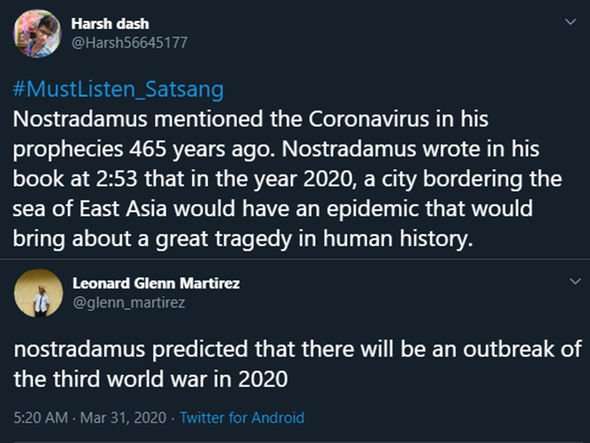 Throughout his quatrains, the French mystic strayed from naming specific dates or years.

Instead, any prophecy credited to Nostradamus is a personal and biased interpretation of a very vague and cryptic piece of writing.

However, Nostradamus’ followers have claimed he correctly predicted the Great Fire of London in 1666 and the death of King Henry II of France in 1559.

According to the website CuriousCosmos.com, Nostradamus warned the world of great earthquakes in North America in 2020.

Nostradamus also supposedly predicted a geological disaster that will strike the “New World”.

On top of natural cataclysms, an economic crisis was also supposedly predicted for 2020.

One person on Twitter said: “Nostradamus predicted that there will be an outbreak of third world war in 2020.”

Another person said: “Nostradamus had a lot to say about 2020.” 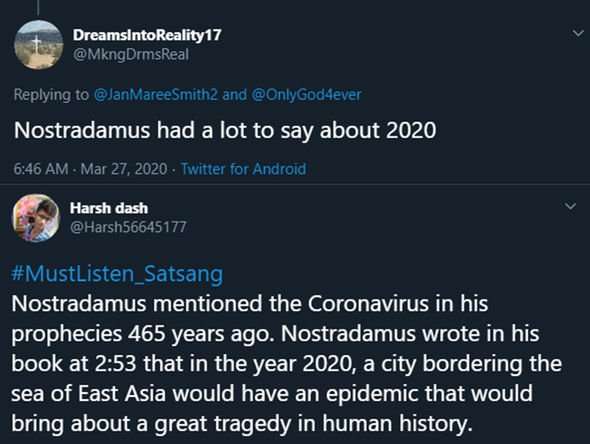 Did Nostradamus predict the coronavirus for 2020?

Many people believe the health crisis caused by the coronavirus was foretold nearly 500 years ago.

Although there is no proof to support the claim in Nostradamus’ writings, social media is rife with unfounded claims about the supposed prophet.

One person said: “Nostradamus mentioned the Coronavirus in his prophecies 465 years ago.

“Nostradamus wrote in his book at 2:53 that in the year 2020, a city bordering the sea of East Asia would have an epidemic that would bring about a great tragedy in human history.”

“But, all of them predicted a plague that would wipe out one to two thirds of the world population.

Nostradamus’ naysayers, however, do not believe the French physician ever made any real predictions of the future.

Brian Dunning, host of the Skeptoid podcast, debunked Nostradamus’ prophecies on his show.

Dad, 35, arrested for dangling and shaking six-week-old baby daughter by...